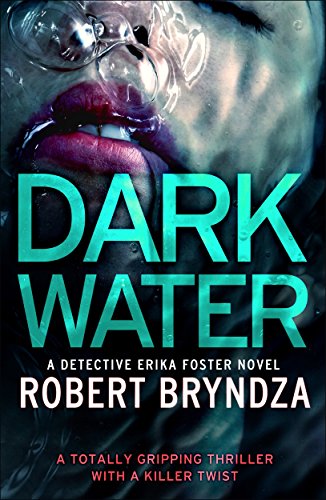 Beneath the water the body sank rapidly.  She would lie still and undisturbed for many years but above her on dry land, the nightmare was just beginning.

When Detective Erika Foster receives a tip off that key evidence for a major narcotics case was stashed in a disused quarry on the outskirts of London, she orders for it to be searched. From the thick sludge the drugs are recovered, but so is the skeleton of a young child.

The remains are quickly identified as eleven-year-old Jessica Collins.  The missing girl who made headline news when she vanished twenty-six years ago.

As Erika tries to piece together new evidence with the old, she discovers a family harbouring secrets, a detective plagued by her failure to find Jessica, and the mysterious death of a man living by the quarry.

Is the suspect someone close to home? Someone doesn’t want this case solved. And they’ll do anything to stop Erika from finding the truth.

I’ve become a massive fan of Robert Bryndza’s Erika Foster novels. And Dark Water is the best book in the series yet.

Twenty-six years ago, seven-year-old Jessica Collins was abducted on her way to a friend’s birthday party. An extensive police investigation uncovered very few leads, and the case was eventually shelved. In the present day, Erika Foster and her team are examining an old quarry (now filled with water) after they receive a tip-off that drugs worth millions of pounds were dumped there. But they are shocked when their investigation in the quarry leads to the discovery of the remains of Jessica Collins and the mood of the team takes on a more somber mood. Erika is determined to make sure that Jessica’s killer is brought to justice, she makes it her mission to lead the case and bring closure to Jessica’s family, and she fights to be given the chance to do so.

Erika Foster is a character who I’m sure will keep readers coming back for more. This is the third book in Robert Bryndza’s gritty crime series, and Erika continues to intrigue and impress me. What I liked about this instalment is that we get to know a little bit more about her family back in Slovakia. Robert introduces us to her sister, Lenka and her two children who arrive on Erika’s doorstep out of the blue looking for a place to stay.

Robert draws us into the story with the opening prologue. Dark Water is one of those books when at the end of each chapter, the book demands that you read one more even when it’s late at night. We see the dumping of Jessica Collins’ remains in the quarry by a curious onlooker. He is scared to involve himself and slips away into the shadows, and it seems that Jessica Collins’ killers will get away with it.

We also meet Amanda Baker, who was the original lead on the investigation. Amanda has been haunted by the disappearance of Jessica Collins and her failure to solve the case has lead to her having a breakdown. She is another interesting character in this book, and it was interesting to read about her career working in the police force before Jessica’s case lead to her ultimate defeat. But like Erika, she is still determined to see justice done and is hopeful she will make the breakthrough the case desperately needs. But there are people out there who want to keep the secrets to this case buried and they are determined to keep it that way at all costs.

Robert delivers a shocking twist in this book that I didn’t see coming. It really tugs at the heartstrings. The Erika Foster series just keeps getting better and better. I need to hurry up now and read the next book in the series. Bravo on another excellent book, Robert, I can’t wait to read the next one!