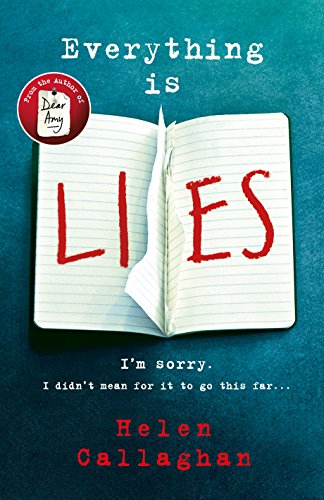 No-one is who you think they are

Until the day she arrives at her childhood home to find a house ringing with silence. Her mother is hanging from a tree. Her father is lying in a pool of his own blood, near to death.

Especially those closest to you

The police are convinced it is an attempted murder-suicide. But Sophia is sure that the woman who brought her up isn’t a killer. As her father is too ill to talk it is up to Sophia to clear her mother’s name. And to do this she needs to delve deep into her family’s past – a past full of dark secrets she never suspected were there . . .

What if your parents had been lying to you since the day you were born?

I really enjoyed reading Helen Callaghan’s debut novel, Dear Amy when it was released last year, so I was excited to hear that her second novel was coming out and what a brilliant follow up to Dear Amy it is! Helen knows how to pull her reader into the story and from the first page I was gripped.

Everything Is Lies starts off with a startling prologue when Sophia Mackenzie returns home to find her mother, hanging from a tree and her father barely alive. The police believe that her parents may have both tried to commit suicide but Sophia can’t understand why they would do this and she sets out to seek answers. The night before her mother’s death, her mother contacted her, begging her to come home, but Sophia ignored her request, what was it her mother wanted to tell her? Was there anything that Sophia could have done to prevent what was about to happen? Sophia begins to unpick her parent’s lives and in the process uncovers surprising details about her mother’s past which she has kept to herself all these years.

Helen Callaghan’s second novel is told from two perspectives: Nina, Sophia’s mother, through her diary extracts and from Sophia’s point of view. The extracts, which Sophia discovers, tell her about the time her mother spent at Morningstar, a major part of the book is told from this perspective. Her mother has been swept in by a spiritualist cult lead by music star, Aaron Kessler who she falls head over heels in love for. Sophia only learns that her mother has written all this down when she speaks to a publisher who is interested in publishing her mother’s story which overwhelms her, particularly at the revelation that her mother has written a book. This immediately had me intrigued, I wanted to find out why a publisher would be interested in her mother’s life. What went on during her time at Morningstar and with Aaron Kessler? This was the main pull of the story, as Sophia raced to find answers and this also is the main source of tension in the novel. Dark secrets soon begin to emerge about her parent’s past.

There is plenty of intrigue here that will keep you turning the pages. Helen created a perfect, eerie atmosphere as she described the scenes during Nina’s time at Morningstar. I always felt as though there was something evil simmering beneath the surface or that something terrible was about to happen; to Nina everything about her life at this point seems perfect and Helen did a brilliant job of giving me the sense that everything about it was about to crack. She also delivers plenty of twists and turns along the way that kept my eyes glued to the page.

Helen Callaghan has done a fantastic job with her second book. She’s a writer who I’m sure I’ll continue to come back to, I love her writing style and I can’t wait to see what she has in store for us next. This is definitely one for you to put on your list in 2018. Thank you to the publisher and to Netgalley for providing me with a copy of the book to review.