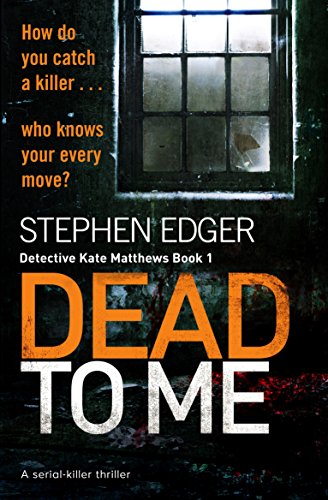 How do you catch a killer who knows your every move?

The woman lay flat on the table, her face to one side, her wrists bound with thick tape. Deep scratches marked the wood beneath her fingers, now resting cold and still…

When a woman’s body is found in an abandoned bar near the Southampton docks, Detective Kate Matthews is called in to lead the investigation. She must solve this case to prove she is coping with the death of a close colleague.

Kate knows a pile of ripped up newspaper cuttings discovered at the victim’s house must be a piece of the puzzle, but her team keep hitting dead-ends… Until she finds a disturbing clue that convinces her of three things: The murder is linked to the body of a man found hanging in a warehouse, she is on the hunt for a calculated serial killer, and the killer is watching her every move.

Kate realises there will be another victim soon, and that her own life is in grave danger, but no one else believes her theory. Can she find and stop the most twisted killer of her career, before another life is lost?

An absolutely NAIL-BITING thriller that will keep you guessing to the very last page. Perfect for fans of Robert Dugoni, James Patterson and MJ Arlidge.

Wow, this was such a good read. I always look forward to a new crime series published by Bookouture as I have never been disappointed by their books, and the first book in the Detective Kate Matthews series is no exception. I’m a little bit late to the party with reading this one, I’ve had it sitting on my Kindle for a while now, but I know I’ll be reading the second book in the series, which is also out now, very soon.

Stephen Edger introduces us to DI Kate Matthews in this new series. Kate is an officer with everything to prove, and we realise from the opening chapters that she has to earn her boss’s trust and respect. Kate has recently transferred to Southampton from the metropolitan police under a cloud of suspicion. At the beginning of the book, she attends the scene of a horrific murder on the docks of Southampton. But she is soon called away from the investigation when the body of a barrister turns up, a barrister who is well known to the police, particularly for letting many suspects in cases walk free. As the race to find the killer heats up, tensions within the team begin to crack; can Kate catch a killer when her own team starts to fall apart? Who can she trust? And when her own family is threatened can she bring the culprit who she wants to catch to justice?

This book is a real page turner. When Stephen first introduces us to Kate, I knew that she was a character who I could root for. There is a mysterious element about her in the opening pages, which kept me hooked and kept me wanting to find out more about her and her previous experience as a police officer. I’m hoping that we’ll get to learn more about her past in future books. I was also intrigued to find out more about her family life. As the investigation heats up, Kate finds herself being charged with having to look after her six-year-old daughter, Chloe, who lives with her Dad and his new wife. Kate isn’t filled with confidence at the prospect of looking after her, even for just a few days. It was interesting to see how they would bond during the time they spent together. It was here that I found myself shaking my head at some of the decisions that Kate made.

Stephen does a great job of planting lots of red herrings. I was amazed at how he managed to pull the rug out from under my feet when he finally revealed the truth. But if you’re intrigued to find out who the real killer is, well, you’ll have to read the book to find out.

This is a fine start to a new police procedural series. I’ll be reading the second book, Dying Day, very soon.