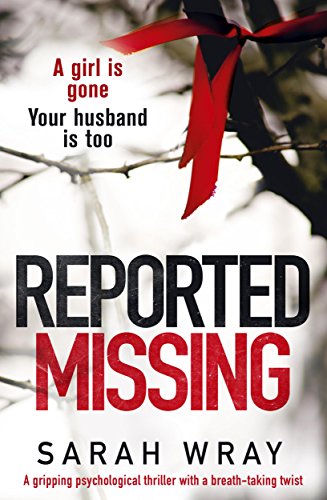 Just a coincidence? Rebecca wants to believe so… But as the police start to draw parallels between Chris and Kayleigh, it’s getting harder for her to trust his innocence.

Faced with an angry town that believes Chris has abducted the teenager, Rebecca tries to discover the truth.

But what she finds shocks her more than she ever thought. How well does she really know the man she loves?

I can’t believe how long I’ve had this book sitting on my kindle; I have been itching to get round to reading it for a long time. Reported Missing is an exciting debut by Sarah Wray. She did a brilliant job of bringing her character, Rebecca, to life as she fought to find answers as to what had happened to her husband and if he has anything to do with the disappearance of a young girl from the same area. I really enjoyed this one.

Rebecca Pendle has hit the lowest point in her life. Her husband, Chris, has disappeared. On top of that, he has been accused of being involved in the disappearance of teenager, Kayleigh Jackson, who went missing on the same day he was last seen. Is there a connection? Surely it is coincidence only. There are a group of people who certainly seem to think so, and the police have reason to believe that Chris may be involved. Soon Rebecca finds herself as the target of a group of people who are fighting to get justice for Kayleigh. Is her husband Chris, really as innocent as she believes. Is there anything that Rebecca is hiding?

Sarah Wray has created an interesting mystery in her debut novel with a terrific hook that kept me engaged. It will definitely keep you turning the pages. The main focus of the book is Rebecca’s search for her husband rather than on the search for the missing teenager. It is Rebecca’s story which is the main plot drive. There were times when I really did feel sorry for her as she tried to come to terms with what was happening in her life and I really wanted things to get better or for her to at least find answers. Sarah Wray painted a vivid portrayal of the impact that her husband’s disappearance and the subsequent allegations against him has had on her life. It was interesting to see how easily people can turn against each other, which is certainly the case in this book

Sarah does like to keep you on your toes as she reveals new information about her character’s lives. As I was reading this book, I felt as though I couldn’t trust anyone and that each character may be hiding a secret. One of the other aspects which I really liked about this book was the setting; the setting was perfect for this novel and Sarah uses it well in creating a foreboding and unsettling atmosphere.

Reported Missing is a captivating debut. Sarah Wray is an exciting novelist who I will be looking out for in the future. I would definitely recommend this if you’re a fan of psychological thrillers.