Today I am delighted to be kicking off the Kiss Me Kill Me blog tour with a guest post by J.S. Carol in which he discusses a typical day in his life as a writer. But first, here’s what the book is about. 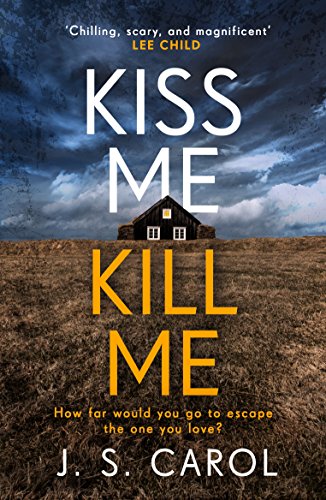 FOR FANS OF THE LOVING HUSBAND AND LYING IN WAIT COMES A TWISTING PSYCHOLOGICAL THRILLER THAT WILL MAKE YOU QUESTION EVERYTHING YOU THINK YOU KNOW.

How far would you go to escape the one you love?

When Zoe meets Dan, he’s everything she is looking for in a man – intelligent, charming, supportive.
It’s only after they’re married that she realises that he’s controlling, aggressive, paranoid.
And there’s no way out.

Zoe knows she has to escape, but Dan’s found her once before, and she knows he can find her again.
But Dan has plans of his own. Plans that don’t necessarily include Zoe.

A typical writing day kicks off at 7.20 when the alarm goes off and I fight the urge to stay in bed for another hour or two. The kids are still fast asleep, so I have forty-five minutes of blissful silence to edit what I’d written the day before. It’s amazing how different everything looks in the cold light of a brand new day. When  you’re carving the story out a word at a time you’ve got your nose right up against the trees. This is my opportunity to take a step back and remind myself what the forest looks like.

Inevitably there will be a couple of redundant sentences, so they have go. Then there are the sentences that don’t make sense. I knew what I wanted to say, and they must have made sense at the time, but now they read like gobbledygook. Those get reworked. Editing is my favourite part of the whole process, so this is a good way to start the day. There’s also the added bonus that it helps me to find my way back into the story.

Finn, my six year old, usually wakes up at eight. Well, wakes up might be overstating things. The reality is that he needs to be physically dragged out of bed, which makes me feel like a monster since he always looks so cosy wrapped up in his duvet. Anyway, I get his breakfast, get him washed, get him dressed. It’s usually somewhere around nine by the time he’s packed off to school and I’m back at my desk.

The next four hours is when the real hard work gets done. The first order of business is choosing some music. I find it impossible to write in silence. I have one of those busy brains that seems to be constantly firing off in a dozen directions at the same time. Having music playing in the background gives it something to focus on so I can get on with the business at hand. As for what I listen to, well that depends on my mood. I’ve currently got a Tom Petty CD playing, but on another day it could be Elbow or The Beatles or even The Carpenters.

Fifteen hundred words is my daily target when I’m working on a first draft. I’m not one of those writers who can churn out five thousand words in a day because they’ve left everything until the last second. It’s just not going to happen. I’m definitely a tortoise rather than a hare in that respect. For me, being consistent is the key to getting the job done. My aim is to write five hundred words an hour. Of course it doesn’t quite work out like that. Some parts are easy to write; others are a pain in the arse. I might only manage a couple of hundred words one hour, but this will be balanced out by the eight hundred words I write the next hour. Whatever way they turn up, it’s a rare day when it gets to one and the counter at the bottom of the page isn’t fifteen hundred words further on from where I started.

The rest of the day is for life stuff. Looking after the kids, teaching guitar, working on my album. That said, you never quite clock off with a job like this. At various points during the day I’ll find myself thinking about what’s happening in the story, working through ideas. Then there’s the dreaded night shift. For some reason when I’m wrestling with a particularly tricky plot problem my subconscious feels that the best time to work on this is at two o’clock in the morning.

Anyway the next day I get up and do it all again. And the next. And the next. Three months I’ve got a first draft. Like I said earlier, being a tortoise works for me.

Thank you to Imogen Sebba at Bonnier Zaffre, for inviting me to take part in the blog tour. And if you would like to purchase Kiss Me Kill Me, you can do so by clicking the link below.