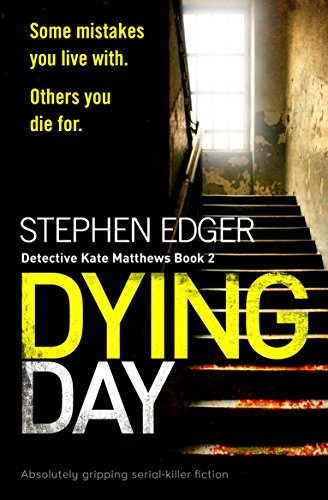 Some mistakes you live with. Others you die for…

When the body of a young woman is found in the boot of an abandoned car near the Southampton Docks, Detective Kate Matthews is ordered to stay well away from the scene.

Exactly a year ago, Amy, a junior detective on Kate’s team, was murdered when she was sent undercover to catch a serial killer targeting young girls. Kate never forgave herself for letting the killer slip through her fingers and her team are worried this coincidence might push her over the edge.

When another girl’s body is uncovered days later with similar bruising around the neck, Kate launches an investigation of her own, determined to connect new evidence to the old to catch this monster before more innocent lives are taken…

Mysterious sympathy cards left with the families of the victims finally lead Kate to the twisted individual from her past. But if she’s found the killer, why does the body count keep rising?

Dying Day is the second book in the Kate Matthews series by Stephen Edger. I really enjoyed the first book in the series, but this book takes it up another level. After I finished the first book, I really wanted to find out more about Kate’s past, and Stephen has certainly satisfied my curiosity in his latest novel. Kate really is pulled through the emotional ranks in this book and we can see again her determination to see a case through, even if it means risking her own life and career. She is a fantastic character and an exciting new addition to the crime fiction world.

At the beginning of Dying Day, Kate is ordered to stay away from a murder investigation that is being conducted by Southampton Police force, after the body of a young woman is found. But Kate can’t help herself, and as she looks into the case she notices similarities to the murder of her colleague, Amy Spencer who was killed the previous year. Amy was working undercover in an attempt to lure a killer who was murdering young girl’s. Kate has never forgiven herself for putting Amy at risk and the fact that she never caught Amy’s killer has haunted her ever since. She has made it her mission to find them and bring them to justice. But as she tries again to hunt for her colleague’s killer, she may be putting her own life at risk.

It was fascinating to learn more about Kate’s recent history in Dying Day. We learn a lot more about her than we did in the previous book in the series. Although the book is told from her point of view, it is also told from Amy Spencer’s, her colleague who was murdered the previous year. The tension in the novel builds up, as you know, as the reader, that you are waiting for the moment when she comes across her killer. It makes for a really gripping read.

This was another exciting read from Stephen Edger, if you are looking for a new crime series, then the Kate Matthews books certainly come recommended from me. I can’t wait to see what Stephen will come up with next.