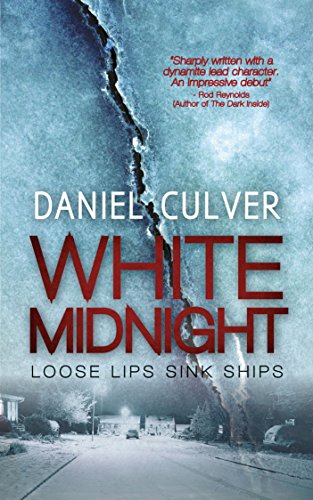 Elizabeth Nowicki, a British woman and self-confessed stoic, settles down in the seemingly idyllic American town of Midnight, with her new husband and his two children. Six months on, life as a step mom is harder than she thought, and the shine of the American Dream has already worn off.

Bored and lonely, Elizabeth is drawn into a nightmare when someone in a duck mask murders two local cops…and the investigation reaches her new neighbourhood. When this is followed by strange happenings across the street, leading to another death, Elizabeth starts to conduct her own investigation….but can she find the killer before the killer finds her?

I was pulled into Daniel Culver’s White Midnight straight away. I really think that it has one of the most original openings that I’ve read in a long while. He immediately sets the scene and the tone of the book as four police officers end up dead in a tavern in a town called Midnight.

Elizabeth Nowicki, has recently moved to the US from the UK. She has married Luca who lives in Midnight and Elizabeth makes the small American town her home, even though it wasn’t quite where she ever expected to be living in America. As she beings to adapt to her new life, she is drawn to the recent shootings in Midnight which have left her stunned.  Coming from the UK where gun crime is a rarity she is left bereft that something as dangerous as this could happen so close to home. And when her only friend in the town is found dead, Elizabeth begins to take matters into her own hands and investigates the strange events that have been happening in her new home. But she isn’t the only person who is interested. As Elizabeth looks into the history of Midnight, she uncovers a series of old crimes that have never been solved and the perpetrator has never been identified.

Daniel Culver’s debut was an intriguing read from start to finish. He opens the novel with a startling opening chapter. It really makes you step back and think about the the characters in this book as the plot unravels and as he introduces us to the townsfolk. As he introduced his protagonist, Elizabeth, I had questions about her, what drew her to marry this man from a small town in America? What prompted her to want to leave the UK? She was an interesting character to explore and I was keen to find out more about her. I thought it was a good idea to introduce a character who is new to the area as we are discovering the town at the same time that she is. This prompts her to be a lot more nosy than perhaps one of the resident’s would be which is really fascinating for the reader. I thought that Daniel really captured the atmosphere of the town well.

If you were a fan of Chris Whitaker’s All the Wicked Girls then I would highly recommend this novel. Daniel Culver is a fresh new talent in the crime fiction world; I’m looking forward to seeing what he comes up with next . Thank you to Liz Barnsley at Manatee Books for inviting me to take part in the blog tour and for providing me with a copy of the book to read.