First Monday Crime is nearly upon us and there is another stellar line-up for next month’s panel. But before I give you all the details, here’s my thoughts on Class Murder by Leigh Russell who will be appearing at next month’s panel alongside three more brilliant crime writers. 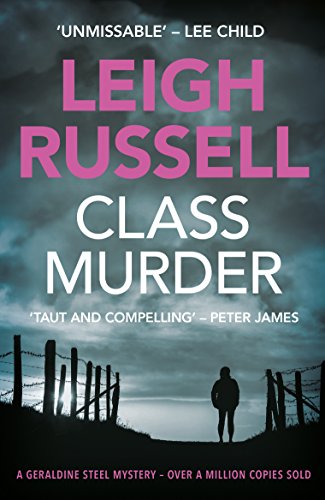 With so many potential victims to choose from, there would be many deaths. He was spoiled for choice, really, but he was determined to take his time and select his targets carefully. Only by controlling his feelings could he maintain his success. He smiled to himself. If he was clever, he would never have to stop. And he was clever. He was very clever. Far too clever to be caught.

Geraldine Steel is reunited with her former sergeant, Ian Peterson.

When two people are murdered, their only connection lies buried in the past. As police search for the elusive killer, another body is discovered. Pursuing her first investigation in York, Geraldine Steel struggles to solve the baffling case. How can she expose the killer, and rescue her shattered reputation, when all the witnesses are being murdered?

Class Murder is the tenth novel in the Geraldine Steel series by Leigh Russell and I can’t believe that I have only discovered this series now. I started reading this book during my lunch break at work and I did not want to put it down, if I could have stayed reading all afternoon I would have.

Geraldine has recently relocated to York after she was forced into a position to leave the Metropolitan Police in London. She knows that she has no chance of promotion and is now working alongside her old colleague, DI Ian Peterson, but their roles have switched. As she is beginning to adjust to her new life in York, she is thrown into a murder investigation when a young woman is found dead. And soon more bodies begin to turn up. The suspect continues to evade them and the police come under fire from the media for their lack of progress. As the investigation progresses a link emerges that binds the victims together. Could the killer be specifically targeting people, and if so, why? Are there more victims on their hit-list to come?

When I started reading this book, I found the reversal of roles between Geraldine and Ian an interesting idea to explore. I was curious to see how this would work out between them and if there would be any tensions from Geraldine’s side, as she is the one who is now taking orders. It left me wondering how Geraldine would get on working up in York and if, whether or not, she would stay to stick it out. I’m intrigued to see how this will develop in future books.

I really enjoyed getting to know the characters in this book, and I’m sure that I’ll return to previous books in the series as Leigh raised plenty of questions about Geraldine’s life which I want to find out more about. Geraldine is definitely the kind of officer who you would want working on your case, she is determined to see results and she is willing to put all other matters aside, including her own family who become increasingly frustrated with this idea.

The plot of the novel was engaging, although it is primarily told from Geraldine’s viewpoint Leigh also writes from the minds of the characters who are being targeted. She also tells the story from the viewpoint of the killer who remains in the shadows. When it becomes clear that the killer is targeting them they come together to try and work out who it is that is behind this and what they can do to try and protect themselves. This is where the tension in the novel escalates as they begin to fear for their lives. And under immense strain, they begin to make rash decisions.

And if you haven’t got any plans for Monday, 9th April, First Monday Crime is the place to be if you are an avid reader of crime. The event takes place at City University and it starts at 6.30 p.m. For next month’s panel, alongside Leigh Russell we have: John Connolly, author of ‘The Woman in the Wood’s’, Rachel Abbott, author of ‘Come A Little Closer’ and Stuart Turton author of ‘The Seven Deaths of Evelyn Hardcastle.’ The panel will be chaired by Barry Forshaw. Tickets are FREE, and you can reserve your space by clicking the link below.