I’m thrilled to be kicking off the blog tour for Salt Lane by William Shaw, which is the start of a brand new series featuring DS Alexander Cupidi. With thanks to Anne Cater at Random Things Tours for inviting me to take part. 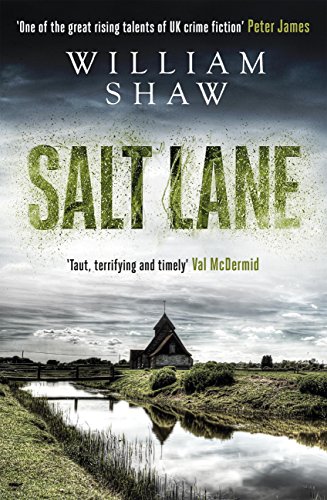 No-one knew their names, the bodies found in the water. There are people here, in plain sight, that no-one ever notices at all.

DS Alexandra Cupidi has done it again. She should have learnt to keep her big mouth shut, after the scandal that sent her packing – resentful teenager in tow – from the London Met to the lonely Kent coastline. Even murder looks different in this landscape of fens, ditches and stark beaches, shadowed by the towers of Dungeness power station. Murder looks a lot less pretty.

The man drowned in the slurry pit had been herded there like an animal. He was North African, like many of the fruit pickers that work the fields. The more Cupidi discovers, the more she wants to ask – but these people are suspicious of questions.

It will take an understanding of this strange place – its old ways and new crimes – to uncover the dark conspiracy behind the murder. Cupidi is not afraid to travel that road. But she should be. She should, by now, have learnt.

Salt Lane is the first in the new DS Alexandra Cupidi series. With his trademark characterisation and flair for social commentary, William Shaw has crafted a crime novel for our time that grips you, mind and heart.

When I read The Birdwatcher by William Shaw last year I really liked DS Alexander Cupidi, so I was excited to find out that she was getting her own series. Although she did feature in The Birdwatcher, you do not need to read it to enjoy Salt Lane, as The Birdwatcher is a stand-alone. I would definitely recommend reading it though, if you would like to find out more about her. The evocative setting in both books alone, which William Shaw skillfully manages to capture in his writing, is enough to compel you to want to read them both.

Alexander Cupidi is thrown into her first major case since relocating from the metropolitan police to the Kent coastline. The body of a North African immigrant is discovered on a farm. He has been killed in horrific circumstances and Cupidi is determined to find out who killed him and why he had to die.  But there is little means of identifying the victim and there aren’t many who are willing to talk. Cupidi is already investigating the death of a young woman who was found shortly before her most recent victim. Is it possible that the two cases could be linked?

Salt Lane is an atmospheric, really well written piece of crime fiction. I loved the setting, which I have already briefly spoken about. William Shaw captures the gloominess of the surrounding area at times and the beauty of the area well. There are some dark, on-the-edge-of-your-seat moments in the book, and the setting of the Kent coastline, worked really well for these scenes, the marshes particularly. William Shaw has such a strong sense of place in his writing.

The mysteries in this book held my attention and the plot kept me wondering how and if they were going to come together. There are some great characters to get to know. Alex Cupidi is a single mum and she has to juggle looking after her daughter, Zoe, while investigating the murder case. Zoe has held on to the hobby that she shared with William South who featured in The Birdwatcher, and this is what makes her character unique and interesting to explore, she certainly isn’t your average teenager. Another character who I also loved was Ferriter who works with Alex. I thought they had a great working relationship and I can’t wait to catch up with them again.

Salt Lane is the start of what I hope will be a long, exciting series featuring Cupidi and Ferriter. It gets a solid five stars from me.