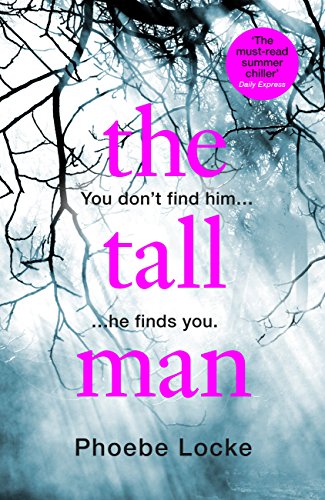 The Tall Man is an ADDICTIVE and UNFORGETTABLE blend of psychological suspense and spine-tingling chills with a hint of Stephen King, Ruth Ware, and Sarah Pinborough’s BEHIND HER EYES. If you love STRANGER THINGS, prepare to be haunted by THE TALL MAN.

A SENSELESS MURDER. A TERRIFYING LEGEND. A FAMILY HAUNTED.

1990: In the darkest woods, three girls devote themselves to a sinister figure.

2000: A young mother disappears, leaving behind her husband and baby daughter.

2018: A teenage girl is charged with murder, and her trial will shock the world.

Three chilling events, connected by the shadow he casts.

He is the Tall Man. He can make you special…

The Tall Man is an utterly gripping and a sinister read from Phoebe Locke. The idea of The Tall Man is a really unsettling one, and it does sweep you up as you try to work out if The Tall Man is real, or if there is something else that is going on here. This is a novel that I think will stay with readers long after finishing.

We start the novel in the present day when an American film crew are filming a documentary on a crime which shocked the world. We know that Amber Banner has killed someone, but we don’t know who, but we do know that she has just been acquitted for murder. As the novel progresses we learn more about Amber’s childhood, and of the effect the legend of The Tall Man had on her mother, Sadie, who abandoned Amber when she was only a young baby. It is the legend of The Tall Man which really grips the nation and the rest of the world.

I loved the spooky elements in this book and Phoebe brought the atmospheric settings to life, I think I will always be slightly wary whenever I next see a forest. The different timelines worked really well in this book, and I enjoyed trying to work out how the ending was going to unfold and who the person was who Amber killed. I thought what was really scary was how seriously the school girls took the legend of The Tall Man, which becomes an obsession for them and as well in how easily others could be manipulated.

There were some hard hitting reveals which Phoebe managed to keep under lock and key really well, right up until those tense final moments. If you’re looking for a chilling read this summer then you should definitely pick this book up.