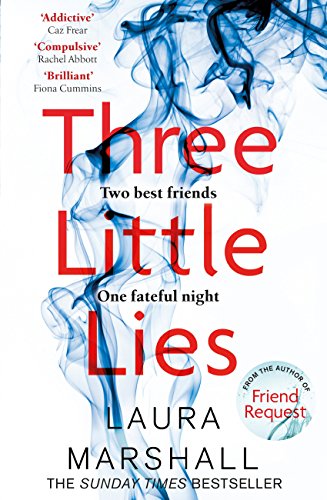 Everyone says she’s run away, but I know better. We’ve been best friends since we were teenagers, since Sasha swept into the neighbourhood and brought colour to my life. Until a brutal attack changed both our lives forever.

I know what happened that night. I know who wants revenge.

And if Sasha has been taken, does that mean I’m next?

Laura Marshall has a talent for coming up with really hooky ideas. They really make you put everything else aside and concentrate on reading her book. In her latest novel, Three Little Lies, she pulled me in with the opening chapter and the final sentence really made me want to read on. Her second novel is an exciting follow up to Friend Request; if you enjoyed her debut you really need to read Three Little Lies.

Laura introduces us to her main protagonist, Ellen. Ten years ago she helped to convict Daniel, the brother of her best friend, Sasha, after he was accused of raping her friend, Karina at a New Year’s Eve party. Both Sasha and Ellen were the main witnesses during the trial and their account helped to put Daniel behind bars. Now, ten years later, Daniel is finally free and when Sasha goes missing, dropping all contact with Ellen, she becomes really concerned that Daniel might be behind her disappearance. Is he seeking revenge on them for their part in putting him behind bars? And if he is, does that put them all in danger?

Three Little Lies is told over different time periods. We flick back to the years of 2006/2007 to when Ellen and Sasha first become friends and when Daniel is on trial for rape. We can see the pull that Daniel and Sasha’s family have on Ellen and especially on her friend Karina who is attracted primarily by their wealth and glamour.

I felt I really connected with Ellen as she searched for her friend. I could clearly see the pain it was causing her and the exasperation that she felt when the police appeared to be doing very little to help her, when it seemed clear that Sasha could be in danger. I really wanted Ellen to get to the bottom of what was going on.

Three Little Lies is a pacy read which keeps you turning the pages. Laura Marshall has written a really intriguing second novel. Thank you to the publisher and to Netgalley for the advance review copy.