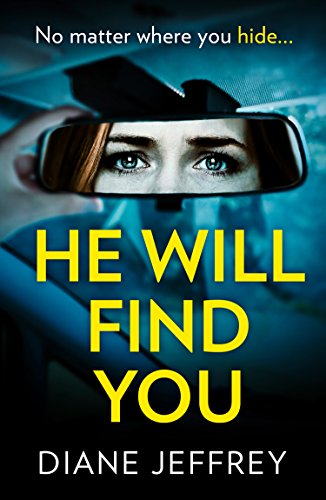 No matter where you hide…

Kaitlyn Best is stuck in a rut. So when she discovers she’s pregnant after a one-night-stand with Alex, her school crush, she throws caution to the wind and accepts his offer to make a new life together in the depths of the Lake District, far from her home… and her demons.

He will find you.

But Alex is not what he seems. And when Kaitlyn’s world begins to crumble before her eyes, she realises she barely knows the man she has agreed to spend the rest of her life with.

Since Alex won’t tell her his secrets, Kaitlyn vows to find them out for herself. But when she uncovers the truth, she realises she has made a terrible mistake…

He Will Find You is the second psychological thriller from Diane Jeffrey. I enjoyed reading her first novel, Those Who Lie, so I was interested to see what she had come up with for her next book.

We follow Kaitlyn who after having a one night stand with her former school crush, Alex, begins a relationship with him. In the matter of a few short weeks, they’re married. But the best news for Kaitlyn is when she finds out that she is pregnant. After the vows are exchanged and the marriage certificate signed, Alex begins to change, leaving Kaitlyn in an unnerving situation. And soon she begins to fear for both her safety and her daughter’s.

Diane Jeffrey explores the effects of psychological abuse as well as physical in her latest book. When Kaitlyn arrives at her new home, The Old Vicarage, eager and excited to begin her new life; I straight away felt that this was all too good to be true. Alex is a cold and calculating character who knows how to manipulate people and a situation. As I began to find out more about Alex, my opinion of him did keep changing, particularly as Diane begins to reveal the trauma he suffered in his past. This is how Diane keeps up the suspense, is he going to do something terrible, is he going to keep his promises to Kaitlyn?

We also learn details of Alex’s previous relationships and that he has two daughters from an earlier marriage, Poppy and Violet. But little more is said about them and this intrigues and frightens Kaitlyn. Why doesn’t he have a relationship with them? Why are there no photographs of his children around the house? Just what is Alex capable of?

For me, I think the pace in the novel did increase more after Chloe was born, and this is where I found the plot to become tense and more gripping. At the start, I was intrigued by Kaitlyn’s decision to marry Alex so quickly.  I became invested in her character as this was a very big decision for her.

In the first half of the novel, there are some parts in the story which really hit the reader. We also see Kaitlyn’s character develop and this is essential, I think, in helping us to understand her and the predicament she is now in. Diane conveys this well in her writing by giving us hints of what is to come, especially in scenes when Alex’s personality begins to change. Diane also shows us the inner workings of Kaitlyn’s mind as she starts to question her marriage.

Towards the end, there were some surprising twists that I didn’t see coming, and one in particular really gave me chills. I just had to keep reading to the end to find out what was going to happen. If you’re a fan of domestic noir novels, then I definitely recommend this book.