Cleo knows she should be happy for her brother Mark. He’s managed to find someone new after the sudden death of his first wife – but something about Evie just doesn’t feel right…

When Evie starts having accidents at home, her friends grow concerned. Could Mark be causing her injuries? Called out to their cliff-top house one night, Sergeant Stephanie King finds two bodies entangled on blood-drenched sheets.

Where does murder begin? When the knife is raised to strike, or before, at the first thought of violence? As the accused stands trial, the jury is forced to consider – is there ever a proper defence for murder?

Now, this is a very good psychological thriller and part courtroom drama. I read Rachel Abbott’s And So It Begins in one weekend, but I could have very easily read it in one go. This is my first Rachel Abbott read, and I must say I really don’t know why I haven’t read her work before. I had so many questions about the characters running around inside my head as I was reading, that I really couldn’t possibly say how the book was going to end as I always kept changing my mind. This book is Rachel’s first stand-alone, so if like me, you haven’t read her work before, this is the perfect time to start.

The plot of this book focuses on Mark, Evie and Cleo. Mark and Cleo are brother and sister. Mark is a professional photographer, and his sister takes bookings for him, she has always been very passionate about Mark’s work and is very keen to get him business and recognition. Evie enters the fold when she turns up at his studios and Cleo thinks that she has struck gold and that this could be a break-out moment for Mark when Evie puts forward a commission for him, asking him to take a portrait of her father who has well established connections. But Cleo will soon live to regret her decision for introducing Evie to her brother as the story is gripped by a much darker tone which changes Mark and Cleo’s lives forever.

Rachel grabbed my attention with the opening prologue in this book; two police officers enter a crime scene, but Rachel keeps it under wraps as to what has actually happened and who the people are who are at the centre of it all, and this added a strong sense of mystery which I really liked. We then go back right to the beginning and Rachel begins to unravel the events which lead up to this moment, which really did well in building the tension and helping us to get a better understanding of the characters involved. The pace quickly heats up again when we arrive back at the opening scene, and this leads to a court case which takes apart the lives of Rachel’s protagonists.

As the truths began to rise to the surface, I never could be sure who to believe or trust. Rachel did an excellent job of throwing in pieces of information that just made me think about the characters, and who they really were, a little bit more, and again I still couldn’t make up my mind about them. I was really questioning the main characters motives as the novel progressed. I did think that the ending was very satisfying.

If you enjoy thrillers that really make you think and question the motives of the characters, then I would definitely recommend And So It Begins. Thank you to the publishers for sending me a copy of the book to review and to Anne Cater at Random Things Tours for inviting me to take part in the blog tour. 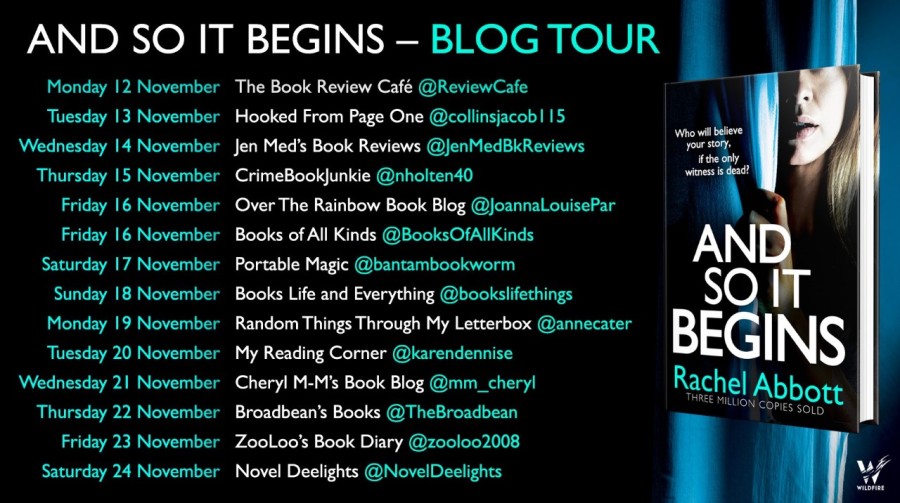