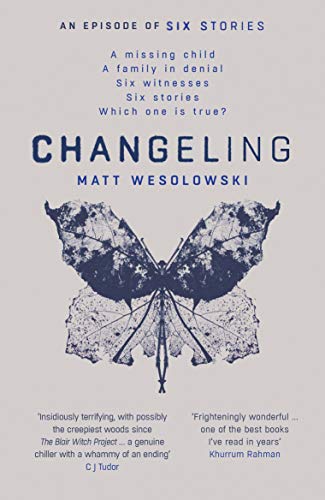 On Christmas Eve in 1988, seven-year-old Alfie Marsden vanished in the Wentshire Forest Pass, when a burst tyre forced his father, Sorrel, to stop the car. Leaving the car to summon the emergency services, Sorrel returned to find his son gone. No trace of the child, nor his remains, have ever been found. Alfie Marsden was declared officially dead in 1995.
Elusive online journalist, Scott King, whose ‘Six Stories’ podcasts have become an internet sensation, investigates the disappearance, interviewing six witnesses, including Sorrel, his son and his ex-partner, to try to find out what really happened that fateful night. He takes a journey through the trees of the Wentshire Forest – a place synonymous with strange sightings, and tales of hidden folk who dwell there. He talks to a company that tried and failed to build a development in the forest, and a psychic who claims to know where Alfie is…
Intensely dark, deeply chilling and searingly thought provoking, Changeling is an up-to-the-minute, startling thriller, taking you to places you will never, ever forget.

Matt Wesolowski has written another cracking story with Changeling. Literally, once I started reading this, I couldn’t stop. This version of Six Stories sees our presenter, Scott King investigating a thirty-year-old cold case. Seven-year-old Alfie Marsden disappeared near a forest in Wiltshire in 1988 on Christmas Eve, and the mystery surrounding his disappearance has haunted many people for three decades as it has never been solved. It seems that no one is ever going to understand the truth as to what happened to Alfie that night, but Scott King is determined to try and find the answers.

I absolutely love the style of Matt’s books. Telling the story through a series of podcasts is a very original idea, and with each book I’ve read by him, I’ve felt as though I was learning about a true crime that has taken place, rather than a fictional one. There is always a very creepy element to these books which is another thing I really like about them. In the last book Hydra, I remember feeling compelled to research the black-eyed children, which Matt was referring to, but I was too frightened to do so after reading the book.

Changeling has the essence of a Brother’s grim fairy-tale. As Scott King looks into Alfie’s disappearance, he examines numerous reports of strange, “paranormal” activities which were taking place in and around the forest area at the time Alfie went missing. There are also mentions of “changeling children”, children who are swapped by fairies; the human child was taken to live in their realm only to be replaced in our world by a beastly child. I have to admit here that reading about the changeling children, did creep me out quite a bit. There is a lot of talk about folklore in this book, and this is what made this story so fascinating to me, as I wondered if these stories had any bearing on what had happened to Alfie.

Once again we hear from the viewpoints of six people who were somehow connected to the case, Alfie’s family, witnesses to the strange events that took place and his teachers. As I got to read their thoughts and opinions, the case became even more interesting, and I was so keen to get to the bottom of it all. As the story is told in the form of an interview, through a podcast, I think it would make an excellent audiobook, so if you are an audio listener, I would definitely recommend giving this one a go as well as the other books in the series.

I really did not expect the direction this book took as the final revelations about the case came to light. Matt Wesolowski took me totally by surprise by the twist, and I’ve spent days thinking about it, especially as I’ve tried a few times to sit down and write this review. I am wondering now how he is going to take the series from here, and I hope there is going to be another book.

Changeling is another outstanding addition to this series. The writing will pull you in from the first page, and you won’t be able to stop reading until you find out the truth about what has happened to Alfie.

Thank you to Anne Cater at Random Things Tours for inviting me to join the blog tour and to Karen Sullivan for the advance review copy.

If you would like to purchase Changeling you can do so by clicking on one of the following links below.