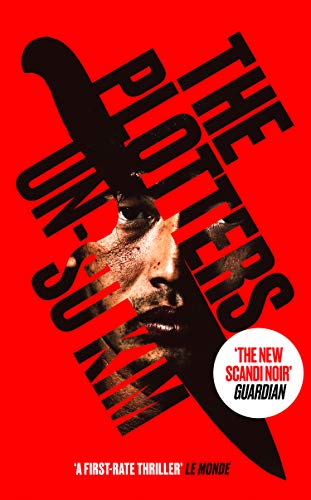 Plotters are just pawns like us. A request comes in and they draw up the plans. There’s someone above them who tells them what to do. And above that person is another plotter telling them what to do. You think that if you go up there with a knife and stab the person at the very top, that’ll fix everything. But no-one’s there. It’s just an empty chair.

Reseng was raised by cantankerous Old Raccoon in the Library of Dogs. To anyone asking, it’s just an ordinary library. To anyone in the know, it’s a hub for Seoul’s organised crime, and a place where contract killings are plotted and planned. So it’s no surprise that Reseng has grown up to become one of the best hitmen in Seoul. He takes orders from the plotters, carries out his grim duties, and comforts himself afterwards with copious quantities of beer and his two cats, Desk and Lampshade.

But after he takes pity on a target and lets her die how she chooses, he finds his every move is being watched. Is he finally about to fall victim to his own game? And why does that new female librarian at the library act so strangely? Is he looking for his enemies in all the wrong places? Could he be at the centre of a plot bigger than anything he’s ever known?

The Plotters is quite different to the usual crime thrillers that I read, but it is very good, and I thoroughly enjoyed reading it. Korean noir is a new genre to me, so I am definitely excited to explore it more. The writing was very engaging, and the opening captured my interest straight away, just imagine treating your would-be-assassin to dinner without realising he is plotting to kill you.

With the crime and thriller genres becoming quite crowded, it can be quite difficult to find something that is fresh and very different, and I think this book is just that. I think what made this book so engaging for me was its characters. We meet Reseng who is a contract killer, working for Old Raccoon who to everyone else runs an ordinary library, but to those in the Seoul’s criminal underworld, it is the centre of organised criminal activity, where assassins are given their tasks and plots are hatched. It is a life that Reseng has become used to, having been raised by Old Racoon after being discovered abandoned as a baby.

There is a lot of dark humour that runs throughout the book, and I really liked how the author managed to weave this into the story. I especially liked the chats that Reseng has with his friend, Bear who helps him dispose of the bodies. I found Reseng to be a very philosophical character, and very intelligent. Although he is a trained assassin; which is what should make you fear him, I found that I actually really liked him. He almost treats his victims with respect, which I found very unusual, most assassins, I’m sure, would just rather the job be over and done with as quickly as possible, without the slightest care for the person they have been sent out to kill.

I definitely found The Plotters to be a much more character driven story. Aside from Reseng, there is also a hugely engaging wider cast of characters, and it was the dialogue between them that really brought them to life. I became so intrigued by them, and I wanted to find out more about their lives. Some parts of the novel I didn’t fully engage with, such as the political side of the events that were taking place, but overall it turned into a read that really surprised me and has left me eager to read more from Un-Su Kim.

With a cast of highly engaging characters and writing that will make you fly through the pages, this is a debut that I highly recommend.

Thank you to Matt Clacher at 4th Estate Books for sending me an advance review copy in exchange for an honest review.

If you would like to purchase The Plotters you can do so by clicking on one of the following links below.