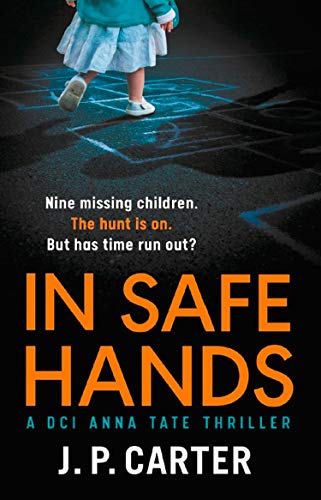 How far would you go to save the ones you love? The first book in a stunning new crime series featuring DCI Anna Tate.

When nine children are snatched from a nursery school in South London, their distressed parents have no idea if they will ever see them again. The community in the surrounding area in shock. How could this happen right under their noses? No one in the quiet suburban street saw anything – or at least that’s what they’re saying.

But DCI Anna Tate knows that nothing is impossible, and she also knows that time is quickly running out. It’s unclear if the kidnappers are desperate for money or set on revenge, but the ransom is going up by £1million daily. And they know that one little boy in particular is fighting for his life.

It’s one of the most disturbing cases DCI Anna Tate has ever worked on – not only because nine children are being held hostage, but because she’s pretty sure that someone close to them is lying…

Wow, what a gripping book. There were some incredibly tense scenes that had me staring wide-eyed at the page as I waited to see just how the events on the page were going to unfold.

In Safe Hands opens up with a shocking scene, when armed men enter a children’s nursery and kidnap nine children in broad daylight. From that moment on the hunt is on as the police race against the clock to track down the kidnappers.

DCI Anna Tate is an intriguing character. This case hits far too close to home for her as her own daughter, Chloe was abducted by her ex-partner ten years earlier. Anna has spent years trying to track them down, but her own searches have proven fruitless. Now, just as she is investigating perhaps the most significant case of her career, a new witness comes forward with startling new evidence. But the man who possesses the knowledge is rapidly fading as he is dying from cancer. Can Anna really abandon the nine children who have been kidnapped for this one last hope of finding her own daughter?

JP Carter raises the stakes high, right from the opening pages of this book. It is a novel that will get your adrenaline pumping, and I found this out myself as I was reading as there were so many developments and moments when I found myself holding my breath as I thought, was this going to be the part when they found the kidnappers. The author did a great job of raising the jeopardy, and the writing makes it such a compulsive read, I couldn’t put it down. I had to find out what happened.

This is the first book in a new series, so it is going to be interesting to see where Anna’s search for her own daughter is taken from here. JP Carter has left me with so many questions as to what is going to happen next to her. I really want to know what has happened to her daughter and I feel that she is close to finding out the truth, but I am worried as to what that truth is going to be.

My only criticism is that I did find it easy to work out who the person behind the kidnappings was fairly early on, but this did not spoil my enjoyment of the story as the race really was against the clock to track down the children before one of them was killed. This was the part of the novel that I found most gripping as I could never be sure how the events were going to pan out in the end for the children and their families.

Overall, a very good start to a new series, it’s one that I am keen to follow. JP Carter is an author who knows how to write gripping prose, and I can’t wait to read the next book.

If you would like to purchase In Safe Hands, you can do so by clicking on one of the following links below.