When I was first approached to read and review In Servitude I was immediately struck by the stunning cover and the compelling blurb. I’m really kicking myself that it has taken me this long to get round to reading it. Once I read the first chapter, I was hooked. 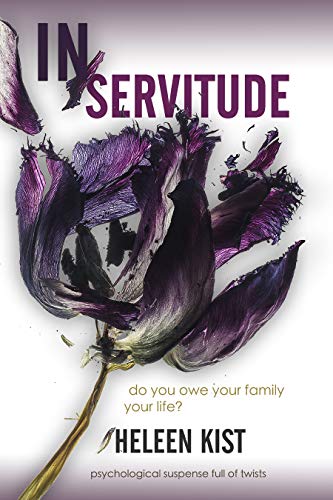 When Grace’s beloved sister Glory dies in a car crash, her life spirals out of control.

She discovers Glory was indebted to a local crime lord and laundering money through her café. What’s worse, Grace is now forced to take over.

Defying her anxiety, Grace plots to save herself and those Glory left behind from the clutches of Glasgow’s underworld. But her plans unravel when more family secrets emerge and Grace is driven to question everything she believed about her sister – even her death.

Could Glory’s accident have been murder?

Well, I had the intention of just reading the first couple of chapters of this book, but once I had read them, I wanted to read the rest and I very nearly read it in one big gulp, and would have done if it wasn’t for those pesky little distractions such as work and sleep. In Servitude by Heleen Kist is an absolutely gripping debut. I can’t believe it has taken me this long to get round to it, but I’m so pleased I finally have.

We meet Grace who has just been handed the shocking news that her sister, Glory, has died in a car accident. Grace is distraught and she quickly steps in to help out with Glory’s children and Glory’s business, a vegan café in Glasgow. But as Grace begins to look into Glory’s affairs, she begins to see a clearer picture of the person who her sister was, and she learns some shocking truths. Grace soon finds herself in some very messy business which is going to prove tricky for her to get out of.

The pace never lets up in this book. I felt very sorry for Grace as she has found herself in the unfortunate position she is in through no fault of her own. Heleen kept the tension simmering away as I wondered what possible direction the book could take next. I feared that something terrible was going to happen to Grace and I could feel this sense of foreboding growing as Grace became more and more involved with what her sister had been up to. And she is soon in the sights of some very nasty people.

There are some very topical issues that are explored in this book, such as the refugee crisis and modern slavery. I thought the way that Heleen portrayed this in her book was very believable and Grace’s passion for helping people who are in this situation came across very strongly in her character.

As I mentioned before, Heleen kept me wondering if something was waiting to happen to Grace just around the corner, and there was a very shocking conclusion to the story. There was such a tense scene which kept me reading until I had turned the final page. I just had to know what happened.

In Servitude is a debut packed with tension and suspense that will keep you turning the pages. This is a must read for thriller loves and I can’t wait to read what Heleen writes next.

If you would like to purchase In Servitude you can do so by clicking on the following link below.

8 thoughts on “In Servitude by Heleen Kist #bookreview @hkist”