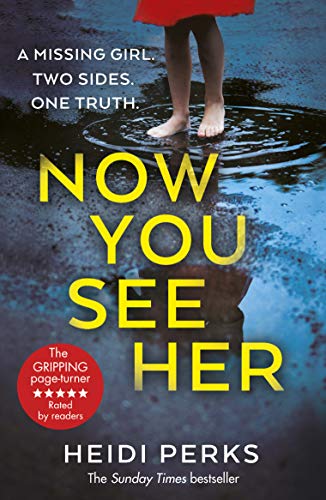 Charlotte is looking after her best friend’s daughter the day she disappears. She thought the little girl was playing with her own children. She swears she only took her eyes off them for a second.

Now, Charlotte must do the unthinkable: tell her best friend Harriet that her only child is missing. The child she was meant to be watching.

Devastated, Harriet can no longer bear to see Charlotte. No one could expect her to trust her friend again.
Only now she needs to. Because two weeks later Harriet and Charlotte are both being questioned separately by the police. And secrets are about to surface.

Someone is hiding the truth about what really happened to Alice.

Now You See Her by Heidi Perks explores a scarily realistic premise. What if you were to lose someone else’s child while they are in your care? It is a scenario that must run through the minds of many whenever they’re responsible for a friend’s child; this is what happens to Charlotte when she takes Harriet’s daughter, Alice to the school fete. One moment, Alice is playing quite happily with her children, but the moment she is out of sight, Alice disappears. Of course, if you were in Charlotte’s position, you would be hoping that they would reappear within the next few moments, unscathed at all by all the fuss that has been created. But what is even more chilling is that another young boy disappeared several months previously and the boy was never found. Is there a kidnapper at large and has the same person struck again?

This book was a compulsive page-turner. Once I started reading, I really couldn’t stop, and I just had to know what had happened to Alice. The story is told from the viewpoints of both Harriet and Charlotte and in two timelines, before and after Alice’s disappearance. What was really striking for me was, even though Alice wasn’t Charlotte’s child, she seems more affected by the disappearance than Harriet is. Harriet is of course devastated, but Charlotte has to carry the burden that she was in charge of Alice the day she went missing, and she will be thinking about this for the rest of her life.

The police investigation into Alice’s disappearance does take more of a back seat as the plot unfolds, but it is the psychological insight into the two women at the heart of the novel that carries it forward. This for me is what made the novel stand out. There are quite a few novels I have read recently which revolve around a missing child, and so I thought this was a really interesting direction for the author to take this story. It definitely does make it feel quite different.

Heidi Perks writing is sharp, and there is tension on every page as Charlotte and Harriet both try to work out what happened. I think I did connect more with Charlotte than I did with Harriet, but perhaps this was because she was the one in charge of Alice when she went missing.

This was a pacy, character-driven psychological thriller. It is a book that will have you questioning everything you think you know about the characters, I know I had so many thoughts and ideas running through my head as I was reading it. I can’t wait to read more from Heidi Perks.

If you would like to purchase Now You See Her, you can do so by clicking on one of the following links below.