Happy publication to Sarah Denzil, her latest novel Only Daughter is published today. I’m thrilled to be sharing my thoughts on my blog as part of the blog tour. 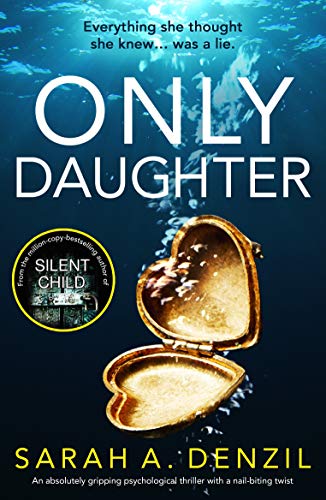 In one moment, Kat Cavanagh’s perfect world is shattered into tiny fragments. The flash of her daughter’s torn yellow dress, the beautiful blonde hair hanging across her precious face. Her own heart-broken sob…

Kat experiences every mother’s worst nightmare when her little girl is found dead. And then the police add the word ‘suicide’. But Kat refuses to believe them.

Even when they show her the familiar looping handwriting and smudged ink on the note Grace left behind. She knows her bubbly, bright daughter would never take her own life.

But as she searches Grace’s perfume-scented room, filled with smiling photos, she uncovers secrets her daughter had been hiding. Secrets that make her wonder how well she really knew the woman her only child was becoming.

Kat’s determined to find out what really happened to Grace on the night she died, even if it means confronting her own troubled past. But as she gets closer to the terrible truth, Kat is faced with an unthinkable question: there was no way she could have protected Grace – or was there?

Only Daughter is a totally gripping novel from Sarah Denzil. I haven’t read anything by Sarah before, but I’m definitely intrigued to read her previous work.

There’s a very dark tone which runs right throughout this novel, right from the beginning when we see, Grace, a young girl about to commit suicide, right through to the heart-stopping conclusion when we finally find out the reasons why she did what she did.

Grace’s mother, Kat refuses to accept that her daughter killed herself and begins to search for answers by speaking to Grace’s friends and by trying to gain access to her social media channels. Her husband Charles and the police are not supportive of Kat’s quest to get to the truth, to them it is an open and shut case, but Kat is determined not to give up. But as Kat delves into her daughter’s world, she discovers that she knew very little about what she was really getting up to.

When we were first introduced to Kat I didn’t find her particularly likeable, to begin with, but as the story developed I became more and more engaged in her quest to avenge her daughter, and I became more and more interested in her as a character. Kat isn’t a person who has had it easy; she grew up on a council estate but has since married a wealthy man and lives with him in their seven-bedroom mansion. Kat is often labelled a gold digger by her social peers, and even her own mother disapproves of her for marrying Charles; this made me feel very sorry for her as she didn’t appear to have many people who she could turn to.

There were so many intriguing twists and turns that made me want to get to the bottom of who Grace really was and why she did what she did. What could have prompted a young girl to kill herself?

I was shocked by the final conclusions which Sarah Denzil brought together in a rapid and cleverly thought out way. It really wrapped everything up well, although some parts did put me in mind of a book I read a couple of years ago, I still found it really enjoyable and heartbreaking as well.

This is a really well written and an engrossing read that will have you desperate to find out what happens, not to be missed by psychological thriller fans.

Thank you to Bookouture for providing me with an advance review copy in exchange for an honest review.

If you would like to purchase Only Daughter, you can do so by clicking on one of the following links below.