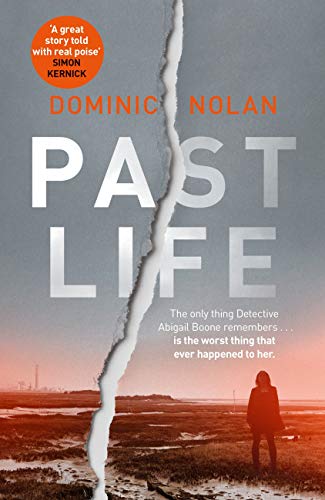 Waking up beside the dead girl, she couldn’t remember anything.
Who she was. Who had taken her. How to escape.

Detective Abigail Boone has been missing for four days when she is finally found, confused and broken. Suffering retrograde amnesia, she is a stranger to her despairing husband and bewildered son.

Hopelessly lost in her own life, with no leads on her abduction, Boone’s only instinct is to revisit the case she was investigating when she vanished: the baffling disappearance of a young woman, Sarah Still.

Defying her family and the police, Boone obsessively follows a deadly trail to the darkest edges of human cruelty. But even if she finds Sarah, will Boone ever be the same again?

Imagine having your past torn away from you and not being able to connect with your own family. That is the situation Abigail Boone is faced with in Past Life by Dominic Nolan, and it makes for an utterly engrossing read.

Abigail is a very intriguing character. We know she has suffered from a horrific accident leaving her with very limited memories from her past life, when she worked as a detective, specifically on missing person’s cases. But she doesn’t seem to want to go back to the woman who she was before, leaving her husband and son frustrated. There is one thing that is driving Abigail though. She knows that before her accident she was attempting to solve the disappearance of a young woman, Sarah Still and she knows she was on her trail in the days leading up to her accident. Abigail is determined to find out what happened to the young woman, in the hope that it will answer some questions for her as well.

I think what intrigued me most about Abigail is the fact that she didn’t seem to want to try and connect with her family. It almost felt as though at times that she wanted them to remain strangers to her, and this did have me asking so many questions about her family life and her character. Was there anything that she was frightened of? I could easily imagine how her family must be feeling about this as I thought about how I would react in their shoes.

The mystery element here was so engaging. We know that Abigail was working on Sarah’s disappearance who has been a missing person now for six years. She decides to continue investigating, even though she is no longer a serving police officer, and her investigations take her close to some dangerous individuals who are intent on causing her serious harm. Dominic Nolan kept turning up the tension as she continued to try and find out what had happened to Sarah, and I feared that something terrible was going to happen to Abigail again and that this time she wasn’t going to get away.

Roo was another fantastic character in the book who is a firm friend of Abigail’s. It seems that Roo is the only person who she can rely on at times; I really liked their interactions with each other. All the characters in this book are well drawn and they are what made the story so engaging and especially the landscape which was described so well.

I’m not sure if this book is part of a planned series, but I would definitely like to return to find out how Abigail is getting on. Past Life is an absolutely riveting debut thriller. You won’t be able to forget about the characters once you have read it. It comes highly recommended from me.

Thank you to publishers for sending me an advance review copy and to Anne Cater at Random Things Tours for inviting me to take part in the blog tour.

If you would like to purchase Past Life, you can do so by clicking on one of the following links below.