Today I’m thrilled to be joining the blog tour for Tick Tock by Mel Sherratt, the second book in the DS Grace Allendale series, with thanks to Sabah Khan at Avon Books for inviting me to take part. 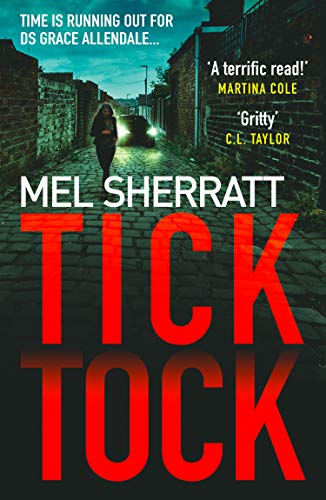 In the city of Stoke, a teenage girl is murdered in the middle of the day, her lifeless body abandoned in a field behind her school.

DS Grace Allendale and her team are brought in to investigate, but with a bold killer, no leads and nothing to connect the victims, the case seems hopeless. It’s only when a third woman is targeted that a sinister pattern emerges. A dangerous mind is behind these attacks, and Grace realises that the clock is ticking…

Can they catch the killer before another young woman dies?

I absolutely loved Hush Hush, the first book in the DS Grace Allendale series, so I was very excited to read Tick Tock. Opening up with the discovery of the body of a young girl, after she broke away from her friends during a cross country run, an intense police investigation ensues. Who could kill a young girl like this and in broad daylight? What was going on in her personal life? As Grace and her team race to find a killer, another body is found, and a scary thought crosses Grace’s mind which terrifies her team.

DS Grace Allendale is such an interesting character. In the first book in the series, Mel Sherratt explored her roots and the family she is trying desperately hard not to be a part of, a family who are well known to the police. We do get to see her struggles with her family again in this book, and they are trying to keep an eye on her and to reel her into their world. But is this simply because she is a police officer and that she could potentially be a valuable asset to them?

When I read the first opening chapter, I was shocked at how the killer managed to kill their first victim so quickly and easily without anyone seeing anything. I couldn’t believe how brazen they were to commit this act in broad daylight and in public. This is what drew me into the story. I had to find out who could do such a thing and why. I knew then that the young girl wasn’t going to be the first and that this was going to be a tough case for Grace and the rest of her team to crack. I could sense the race against time to bring the person responsible to justice.

I did not predict the final outcome of this book at all. The pace never drops, and there is a chilling atmosphere which runs right throughout the book as Grace and her team chase down leads and interview suspects. As I mentioned earlier, a scary thought crosses Grace’s mind, and I could really sense the fear the police officers felt as it dawned on them what could potentially be happening as they tried to work out the killer’s motive.

The mystery here will draw you in, and you won’t be able to stop turning those pages until you have found out the answers. Chilling, gritty and absolutely gripping this is another top read from Mel Sherratt. I can’t wait for her next book.

If you would like to purchase Tick Tock, you can do so by clicking on one of the following links below.