The Whisper Man was one of my top anticipated reads of 2019 and it certainly lived up to my expectations. For crime fiction loves this is one not to be missed. 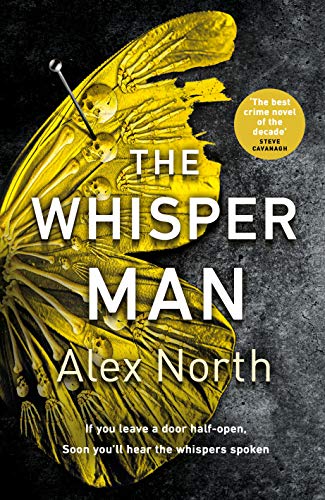 If you leave a door half-open, soon you’ll hear the whispers spoken…

Still devastated after the loss of his wife, Tom Kennedy and his young son Jake move to the sleepy village of Featherbank, looking for a fresh start.

But Featherbank has a dark past. Fifteen years ago a twisted serial killer abducted and murdered five young boys. Until he was finally caught, the killer was known as ‘The Whisper Man’.

Of course, an old crime need not trouble Tom and Jake as they try to settle in to their new home. Except that now another boy has gone missing. And then Jake begins acting strangely.

He says he hears a whispering at his window…

I remember first hearing about The Whisper Man a little over a year ago, and I was desperate to get my hands on a copy. Although I was slightly worried as it had received a lot of early praise if it would live up to my expectation, and I’m relieved to tell you that it certainly did. This is one of the best crime novels I’ve read this year. Alex North’s writing is totally immersive and the line “if you leave the door half open, soon you’ll hear the whispers spoken,” chilled me. This is a very well thought out book with a chilling and creepy atmosphere, and it was done really well.

Tom and his son Jake move to the quiet town of Featherbank following the death of Tom’s wife. They’re hoping for a fresh start, but soon strange things start to happen, especially with Jake who begins talking to imaginary friends which Tom, as you can imagine, has a lot of concerns about. A couple of decades ago a serial killer abducted and killed several children, one remains missing. In the present day, another child has disappeared, and soon the killer has their eyes set on Jake. But there are some scary similarities to the crimes that took place several decades before. But the man responsible for those crimes is in prison. Who is carrying out these crimes now?

This is a novel with a huge amount of heart. Tom confesses in the opening lines how he has struggled to bond with his son, but you can really see their relationship develop throughout the course of this book and this makes the final scenes so tense and gripping. I couldn’t be sure where we were going to end up at the end, and there were some times when I almost couldn’t bear to find out as I didn’t want anything bad to happen to the characters. A book is only gripping, I find if you care a lot about the characters and this is what Alex North has achieved with this book.

There is real depth to Alex North’s writing, I really engaged with Tom and his son as they tried to make a new start. You can see just how difficult this is for them and there are some scenes that I’m sure will pull at the heartstrings of many readers. Right from the start of the novel I just got the feeling that something terrible was going to happen and this darkness ran right from the beginning to the heart pounding conclusion.

The Whisper Man is a top crime novel, one I’m certain will hit the bestseller lists. Alex North is a writer who I’m sure will jump straight to the top of my TBR pile whenever he has a new book out. Brilliant and captivating. I highly recommend it.

If you would like to purchase The Whisper Man, you can do so by clicking on one of the following links below.

One thought on “The Whisper Man by Alex North #bookreview”