I’m thrilled to be joining the blog tour for Stolen by Paul Finch today on my blog, which is the third book in the DC Lucy Clayburn series. 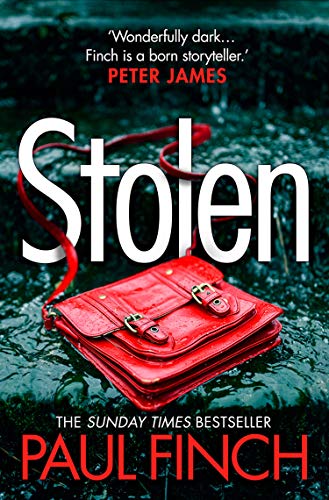 How do you find the missing when there’s no trail to follow?

DC Lucy Clayburn is having a tough time of it. Not only is her estranged father one of the North West’s toughest gangsters, but she is in the midst of one of the biggest police operations of her life.

Members of the public have started to disappear, taken from the streets as they’re going about their every day lives. But no bodies are appearing – it’s almost as if the victims never existed.

Lucy must chase a trail of dead ends and false starts as the disappearances mount up. But when her father gets caught in the crossfire, the investigation suddenly becomes a whole lot more bloody…

In Manchester people are disappearing off the streets, people who many wouldn’t even worry about; people who are sleeping rough and drug addicts, until a young woman vanishes while out running, which prompts a response from the police. One thing that links the disappearances is a dark coloured van seen in the area that has aroused the suspicions of several witnesses.

DC Lucy Clayburn becomes aware of the missing people and starts an investigation. But as she gets to grip with what could prove to be a very sinister case, her own position in the police begins to come under threat. Two years ago, Lucy discovered that she was Frank McCracken’s daughter; Frank is a dangerous criminal, well known to the police and is one of the top bosses of a criminal organisation. So far she’s managed to keep this a secret from her colleagues back at the station, but now it seems that she may have to come forward and tell the truth. Will her career survive? Will her father’s reputation survive? Lucy’s relationship with her father is what gives this series a really edgy feel.

Paul Finch’s Lucy Clayburn series is one of my favourites. There is always a strong element of mystery when it comes to Paul’s openings for his books, and this is what makes them so gripping, right from the get-go. There were a lot of things I liked about this novel; there’s a strong plot which pulled me into the story as well as Lucy’s own personal dilemma. She is perhaps faced with one of the toughest choices of her career here, and this was one of the most gripping parts of the story, would she or would she not come clean to her boss, but I won’t be revealing any details on that here.

There are quite a few on the edge of your seat moments throughout this book, and I just had to keep turning the pages to find out what was going to happen. Lucy is a police officer who is unafraid of sailing close to danger. I think what I really like about her, is that she is in this job simply because she cares about making a difference in her community. At the moment she doesn’t think about promotion, as she tells her father, she will quite happily stay as a detective constable if it means coming clean about their relationship.

One character who I thought was written really well was Sister Cassie, a former nun who still likes to stick to her old ways. I really liked the friendship that she had with Lucy, and I think she was one of my favourite characters from this book. I’d definitely like to see her return.

I think Stolen is the best book yet in this series. Gritty, full of suspense and with a nail-biting ending, this makes for a really enjoyable read. Another top read from Paul Finch, which I highly recommend.

If you would like to purchase Stolen you can do so by clicking on one of the following links below.