Today it’s my stop on the blog tour for Doug Johnstone’s brilliant new novel, Breakers. With thanks to Anne Cater at Random Things Tours for inviting me to take part. 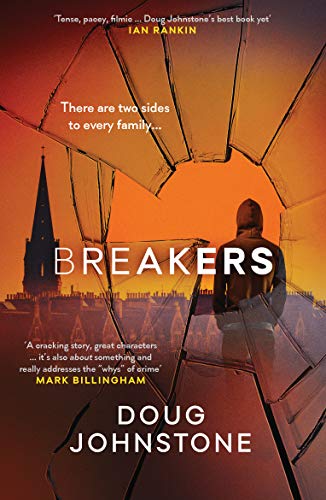 A toxic family … a fight for survival…

Seventeen-year-old Tyler lives in one of Edinburgh’s most deprived areas. Coerced into robbing rich people’s homes by his bullying older siblings, he’s also trying to care for his little sister and his drug-addict mum.

On a job, his brother Barry stabs a homeowner and leaves her for dead, but that’s just the beginning of their nightmare, because the woman is the wife of Edinburgh’s biggest crime lord, Deke Holt.

With the police and the Holts closing in, and his shattered family in devastating danger, Tyler meets posh girl Flick in another stranger’s house, and he thinks she may just be his salvation … unless he drags her down too.

A pulsatingly tense psychological thriller, Breakers is also a breathtakingly brutal, beautiful and deeply moving story of a good kid in the wrong family, from one of Scotland’s finest crime writers.

Oh. My. God. This book. Breakers was nothing like I expected it to be, I’ve read Doug Johnstone’s previous novel Faultlines, but I think this book takes his writing up to another level. There’s no mistake that this is a dark, dark book but it also pulls at the heartstrings. It has characters that will get under your skin and a tension fuelled plot that will keep you turning those pages.

This is a book about family. It asks the question, just how far are we prepared to go to protect the ones we love. Tyler Wallace hasn’t had the best start in life. He has never known who his father is, and his mother, Angela is a drug addict. The main person who Tyler cares about in his life is his younger sister, Bethany or Bean, as he calls her. He has two half siblings, Barry and Kelly and the three of them make their money by burgling posh houses in Edinburgh. But when one of their jobs goes badly wrong, it sets in motion a chain of events that will change the family forever.

There are so many things I want to talk about this book. One of the parts which I really liked was Tyler’s relationship with his sister. I could clearly see that he is desperate to give them a better chance in life and for Bean to have a better start than he did, and this shines through in his character, making him stand out next to Barry and Kelly. His brother, Barry, is a very different person. It seems that not even the threat from a very dangerous family will stop him in getting what he wants; I absolutely hated him, he is such a scary and unpredictable character. He made me even keener to see Tyler and Bean get out and make a fresh start.

Tyler’s friendship with Flick was another aspect of the novel I really liked. I couldn’t be sure where Doug Johnstone was heading with this after they first met. She is a girl from a different, more affluent part of the town and you would think that a relationship between them wouldn’t work, but here it really does.

I think the characters within the pages of this book will all stay with me long after finishing. Some parts of this book I did find hard to read, but this isn’t a criticism, far from it, it was because I connected so much with Tyler and Bean that I didn’t want anything bad to happen to them.

One of the points which Doug had me thinking about as I was reading, was what drives people to a life of crime? Their background, where they’re from or how they are brought up? If Tyler and his family had been brought up in a different area would things have worked out as badly for them as they have?

Breakers is a very good book, one that will draw you into the dark side of Edinburgh which Doug Johnstone describes so, so well making his writing very immersive. If you enjoy books that keep you on edge and transfixed to what is happening on the page, then I highly recommend that you give this book a go.

If you would like to purchase Breakers, you can do so by clicking on one of the following links below.