I’m delighted to be kicking off the blog tour for Without a Trace by Carissa Ann Lynch today on my blog, alongside Tracy Fenton from Compulsive Readers. With thanks to Anne Cater at Random Things Tours for inviting me to take part. 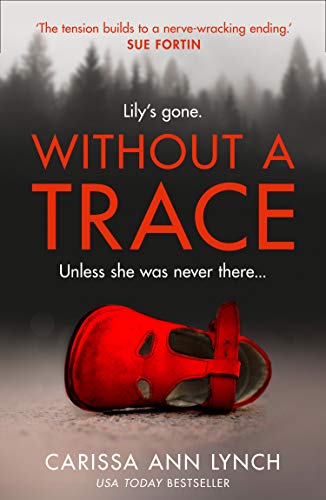 Lily’s gone.
Someone took her.
Unless she was she never there…

A little girl has gone missing.

Lily was last seen being tucked into bed by her adoring mother, Nova. But the next morning, the bed is empty except for a creepy toy rabbit.

Has Nova’s abusive ex stolen his “little bunny” back for good?

At first, Officer Ellie James assumes this is a clear custody battle. Until she discovers that there are no pictures of the girl and her drawers are full of unused toys and brand new clothes that have never been worn…

Is Ellie searching for a missing child who doesn’t actually exist?

Without a Trace took me completely by surprise. I devoured this book in two days. This is the first book by Carissa Ann Lynch, which I have read, and I can definitely say that I will be reading more books by her. There’s a very creepy atmosphere to this story which kept me thinking that something terrible was going to happen or something dark was going to be discovered.

The lead detective in this book is Ellie Jamison. Ellie is a police officer who has caused friction in her team. She is known as the cop who shot one of their own. Even though Ellie did it under the right circumstances, there is still a level of distrust shown towards her, and she feels very much on her own. At the beginning of this book, they receive a call from a desperate woman, Nova, whose child has gone missing. But as Ellie arrives at the scene, a different picture begins to evolve, and soon this case takes a very intriguing and sinister turn. Does Nova’s daughter even exist?

This book took a very different turn to what I expected. I think this is what made me turn the pages so fast, as it didn’t feel like anything else I had read before and I really wanted to find out what had happened and what the truth was. The set-up was written so brilliantly, and Carissa made her story very unpredictable. I felt I couldn’t trust any of the characters who were somehow involved in the crime, especially Nova and her ex-husband.

Ellie was a character who I had a lot of sympathy for. She isn’t given an easy time by the rest of her team, and there is one police officer who treats her very unfairly. She is tenacious and determined, and these were the qualities in her character, which shone through most strongly. I also liked the relationship she had with her mother and that she asked for her advice and opinions. I think I would like to see Ellie return in a future book. I really warmed to her and I would be interested to see her character develop.

There were some very clever twists and some ideas which I hadn’t even thought possible. I could tell that Carissa had put a lot of thought and carried out a lot of research into some of her ideas.

This is a very twisty book that captured my interest right from the first page. You best make sure you have an afternoon free when you start this because you won’t want to put it down. The suspense continues to build until it reaches its climax. Captivating and very well plotted. Carissa Ann Lynch’s name is definitely now on my radar. I can’t wait to read more from her.

If you would like to purchase Without a Trace, you can do so by clicking on one of the following links below.