I’m delighted to be joining the blog tour for Injections of Insanity by Lorraine Mace today on my blog. With thanks to Rachel at Rachel’s Random Resources for inviting me to take part. 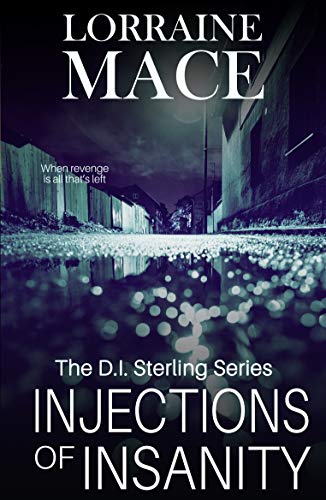 Detective Inspector Paolo Sterling has just six weeks to solve a series of murders by insulin injection, with nothing to connect the victims except the manner of death and a note left at each crime scene.

The murderer, determined to avenge a wrong from many years earlier, gets close to his prey by assuming various identities.

Can Paolo win in his race against the pretender?

Injections of Insanity is a gritty police procedural, the third in Lorraine Mace’s Detective Paolo Sterling series, but it can easily be read as a stand-alone. Lorraine opens her latest book with the murder of a professor, a man who wasn’t easily liked and many have one or two bad things to say about him. And they are not afraid to be vocal about it, even in the wake of his death. So the list of suspects for the police is potentially quite long. But what puzzles the detectives is a clue left behind by the killer, that the professor is the first in a list of planned victims, who will shortly follow. What is the killer’s motive? Is there any link between the victims? Can they stop the killer before they kill again?

This is a dark novel. There’s a real race against time here as the detectives fail to apprehend the killer quickly and when the leads begin to dry up. DI Paolo Sterling is desperate for a breakthrough, and I could see this coming through strongly as he tried to make sense of the case. Paolo and his team are determined to pull out all the stops to crack it.

I wanted to find out why the killer was targeting these specific people. There was something in their past that had upset them so much it has made them hell-bent on revenge. I wanted to know what could possibly provoke such a strong reaction in an individual.

I really liked Detective Paolo. I think one of the things I liked about his character in this book was his relationship with Jessica, which grows as the story progresses and it’ll be interesting to see how this develops in future books. I thought it added a real human touch to his character.

This is the first book by Lorraine Mace I have read, and I enjoyed reading it. The strong dialogue kept the pace flowing forward, and the writing was very immersive. I’m certain I’ll be returning to this series again. Injections of Insanity is a book that will keep you asking questions and keep you gripped. I would definitely recommend it to fans of police procedurals.

If you would like to purchase Injections of Insanity, you can do so by clicking on the following link below.