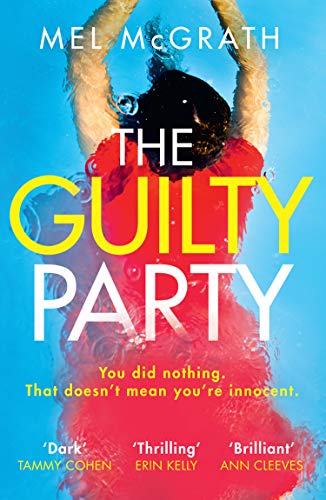 You did nothing. That doesn’t mean you’re innocent.

On a night out, four friends witness a stranger in trouble. They decide to do nothing to help.

Later, a body washes up on the banks of the Thames – and the group realises that ignoring the woman has left blood on their hands.

But why did each of them refuse to step in? Why did none of them want to be noticed that night? Who is really responsible?

And is it possible that the victim was not really a stranger at all?

The Guilty Party by Mel McGrath is a masterclass in plotting and suspense. I loved the clever way in which she weaved this tale together, starting out at a night out in Wapping when a group of friends witness something horrific, a woman being attacked, after a night out at a music festival. But is there more to this crime than first meets the eye? And when a woman, who they suspect is the person they saw, turns up dead the next day, washed up on the Thames, none of them are particularly keen on telling the police what they saw. This is despite a massive public appeal for witnesses to come forward.

This had a very complicated plot, but Mel McGrath’s writing is really readable. What I really liked about it was how incredibly detailed the book was and how she fleshed out her main protagonists, the four members of the group. I didn’t find any of the characters particularly likeable. I think the only character who I did feel for, was Cassie; the only member of the group who was trying to persuade the rest to go to the police with what they knew. I could see just how guilty she felt about staying silent on the matter and how this was beginning to eat away at her. It seemed to me that she was the only member of the group with a heart. And then I wanted to know why the rest of the group didn’t want to divulge this information? What possible reason could they have for not wanting to go to the police? Why wouldn’t they want to help?

This is a novel that will have you peering a little more closely at each character as Mel McGrath works backwards to peel back the layers, in what was going on in their lives in the lead up to the festival. I was utterly captivated as I waited to find out just what was going on and if there was anything they weren’t yet revealing about that one night that holds the plot together. I would just say though that there are some uncomfortable scenes, but Mel McGrath’s writing had me totally gripped, and I had to see how everything played out in the end.

This is one of the best books I’ve read this year, and I’ve no doubt that it has sealed a place in my top ten. It’s a book that will perhaps also make you question about how you would react if you were in a similar situation. The Guilty Party is a very dark read, but very absorbing.

If you would like to purchase The Guilty Party, you can do so by clicking on one of the following links below.