I’m delighted to be joining the blog tour for the ninth novel in James Oswald’s Inspector Tony McLean series, Cold as the Grave today on my blog and I have a fascinating guest post from James to share with you. With thanks to Anne Cater at Random Things Tours for inviting me to take part. 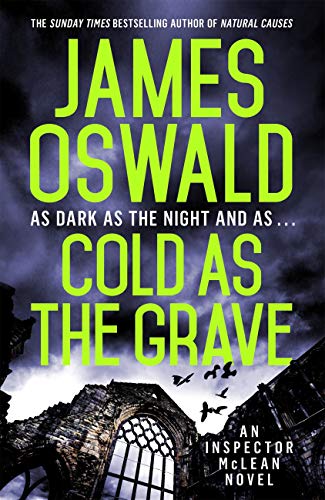 Her mummified body is hidden in the dark corner of a basement room, a room which seems to have been left untouched for decades. A room which feels as cold as the grave.

As a rowdy demonstration makes its slow and vocal way along Edinburgh’s Royal Mile, Detective Chief Inspector Tony McLean’s team are on stand-by for any trouble. The newly promoted McLean is distracted, inexplicably drawn to a dead-end mews street… and a door, slightly ajar, which leads to this poor girl’s final resting place.

But how long has she been there, in her sleep of death? The answers are far from what McLean or anyone else could expect. The truth far more chilling than a simple cold case…

1 – Although I come from a Scottish family and have lived most of my life in Scotland, I was actually born in the Rye Street Hospital in Bishops Stortford, England. Just across the road from the vets. I grew up across the county line, in north Essex, and so am technically an Essex boy.

2 – Much like my fictional detective, Tony McLean, I was sent away to boarding prep school at a very young age. I won’t name the school, as it’s not like it was back then at all, but I disliked it as much as Tony did his.

3 – My first car, bought very second hand not long after I had passed my driving test, was a 1976 Alfa Romeo Alfetta GTV. It cost me the princely sum of £750, and the same again to insure each of the four years I owned it. Sadly, like many Alfas of its vintage, it dissolved into rust and had to be scrapped. It fired a lifelong love of the marque though – I currently own two – and inspired my choice of car for Tony McLean.

4 – My first paid job was a pre-Christmas stint working on a turkey farm. I initially spent my time stubbing turkeys that had just been plucked (removing the few remaining feathers and broken quills from the still-warm skin), but I soon graduated on to weighing and processing orders. I can still smell them to this day, and haven’t had a turkey at Christmas since.

5 – I lived in a little village in the Cambrian Mountains in Wales called Cwmystwyth for almost ten years, moving there when my partner took up the post of livestock research scientist at the nearby Pwllpeiran Research Farm. The area, and the language and folklore of Wales inspired my epic fantasy series The Ballad of Sir Benfro.

6 – One of several short-term jobs I had while living in Wales was for a project called Wales Worm Watch. The job involved regular visits to a number of sheep farms dotted around the country, to collect fresh samples of sheep pooh for analysis to see whether their intestinal worms were developing resistance to the drugs used to kill them. Mostly this involved picking up pooh from the ground, but a few samples had to be taken directly, as it were. I can thus say that I have had a truly shit job.

7 – (Chief) Inspector McLean began life as a support character I wrote for a comic script submitted on spec to 2000AD in the early 1990s. He was originally called John, until I remembered that the Bruce Willis character in the Die Hard movies is John McClane. That comic script was never published, but it formed the basis for the eighth novel in the series, The Gathering Dark, written twenty five years later. Nothing is ever wasted!

9 – In 2014 I appeared on American TV, on The Late Late Show with Craig Ferguson. It was just as bizarre and surreal a situation as you might imagine. Craig did his very best to promote me and my books, but due to some unexplained error, my US publisher had sent a copy of The Hangman’s Song, which wasn’t actually out until a few months later. It appeared as a prop in the next episode, as they recorded two back to back, but alas, no one was able to go out and buy it.

10 – When Penguin Books bought the rights to my first three Inspector McLean novels in late 2012, I spent the bulk of my initial advance payment on a new tractor. The manufacturer (Claas), found out, and ran a feature in their corporate magazine Tractor Times, with me on the cover.

If you would like to purchase Cold as the Grave, you can do so by clicking on one of the following links below.