I’m delighted to be joining the blog tour for Stone Cold Heart by Caz Frear. With thanks to Tracy Fenton from Compulsive Readers for inviting me to take part. 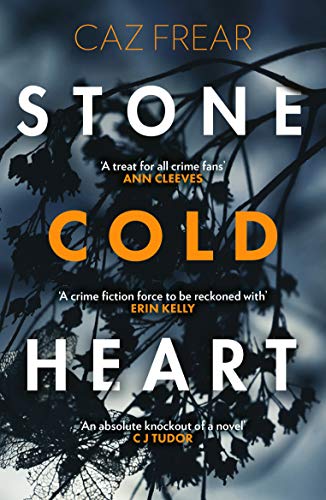 A fractured marriage. A silent family. A secret worth killing for.

When DC Cat Kinsella is approached by Joseph Madden for help with his wife, Rachel, there’s not much she can do. Joseph claims that Rachel has been threatening him, but can’t – or won’t – give Cat details as to why. Dismissing it as a marriage on the rocks, Cat forgets about it.

That is until Naomi Lockhart, a young PA, is found dead after a party attended by both Joseph and Rachel, and Joseph is arrested for the murder.

Joseph says his wife is setting him up.
His wife says he didn’t do it.
The trail of evidence leads to even more questions . . .

Adulterer. Murderer. Victim. Who would you believe?

All I’m thinking after turning the last page of Stone Cold Heart is, whoa. Suffice to say it has left me eager to get my hands on the next Cat Kinsella novel as soon as possible.

Caz Frear is fast becoming one of my favourite writers. When I read her debut, Sweet Little Lies, I absolutely loved her writing style, and I instantly got on with Cat Kinsella. She is a character who is full of wit, but she isn’t without her own flaws. Events in the last book nearly broke her after she learned the truth about a girl who went missing from her hometown in Ireland almost twenty years previously. Although there are some references to that case in this book, it can still be read as a stand-alone, but I would definitely recommend that you read the first one as well.

The novel starts with a shifty individual, Joseph Madden asking Cat for help after he has become concerned about threats his wife has made against him and he is desperately seeking advice. Cat is quite quick to dismiss the claims, but after a girl has been found dead, after a night out at a party which Joseph attended, along with members of his family, she has to get to the bottom of what’s going on. And she has to unpeel the layers sewn together by those closest to events which took place to uncover the truth.

There are so many interesting aspects to Cat Kinsella’s character. I particularly enjoyed reading the scenes when she is with her own family and her relationship with them, particularly with her father, is put to the test, both in this book and in the last.

Caz Frear is a writer who really adds depth to her characters. It is as though they could be people you know in real life. Stone Cold Heart is utterly brilliant. Once the next book is out, I’m sure I’ll be dropping everything to read it. Great stuff. If you haven’t yet read Caz’s books, you really need to.

If you would like to purchase Stone Cold Heart, you can do so by clicking on one of the following links below.