I’m delighted to be bringing you an extract from Sign of the Cross by Glenn Cooper as part of the blog tour. With thanks to Holly at Blackthorn Books for inviting me to take part. 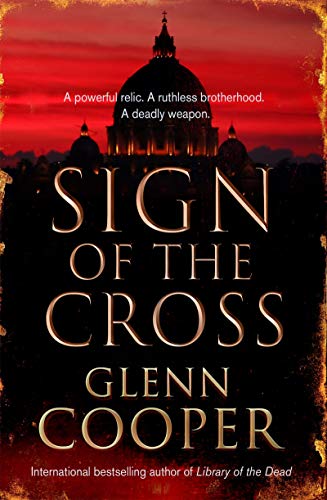 Abruzzo, Italy: a young priest suffers the stigmata of the crucifixion.

The Vatican, Rome: the Pope calls on Harvard professor Cal Donovan to investigate the truth of the priest’s claim.

Berlin, Germany: a neo-Nazi organisation believes the priest is the key to an earth-shattering secret. A secret that can be used as a deadly weapon.

When the priest is abducted, a perilous race against the clock begins. Only Cal can track down the ruthless organisation and stop it, before an apocalyptic catastrophe is unleashed.

The relentless Jerusalem sun had baked the earth hard as stone. Despite the midday heat, the leather-skinned laborers swinging heavy picks dared not break their cadence. The lady was close by, watching their every move, listening to the musical pings of iron striking the hard concretion.

She sat, shaded by her tent, on a flattened mound of detritus overlooking the excavation. Unsmiling Roman soldiers stood guard at each corner of the open-sided enclosure. These men and their comrades, who encircled the site with a ring of steel, were no ordinary legionnaires, but an elite cohort of centurions chosen by the emperor himself. It was not as if there were specific threats against the lady’s person or even a general sense of menace. In truth, most of the people of Jerusalem were supportive of her actions and appreciative of her generosity to the poor. But there was no room for a cavalier error. One malcontent with a sling could have wrought disaster. This was the emperor’s mother, an empress in her own right.

The tavern girl who was consort to an emperor, Constantius Chlorus, and birthed a greater one, whom history would come to know as Constantine the Great. The man who defied centuries of Roman tradition, sweeping aside the gods and embracing Christianity.

If Constantine did the sweeping, then Helena was the broom.

So enamored was she with this young Christian religion, that at the age of near-eighty – when most noble women in extreme dotage were being carried from room to room in comfortable Roman villas – spry Helena was making pilgrimages to distant lands in search of the relics of Christ.

Arriving in the holy city of Jerusalem with her entourage, she astonished the ordinary populace by walking among them in their markets and churches, asking what they had learned from their ancestors about the location of Christ’s tomb and Golgotha: the site of his crucifixion. The oral history was strong. Three hundred years in a land so ancient and rich in storytellers was but a grain of time. Now, two years into her expedition, the end was in sight and Helena’s success was staggering. She had churches built on the site in Bethlehem, which she deemed to be that of Christ’s birth, and on the Mount of Olives, the place of his ascension. These discoveries were but a trifle compared with the enormous task at Calvary: the site most often mentioned by locals as Jesus’s burial place. Two hundred years earlier, Emperor Hadrian had undertaken a reconstruction of Jerusalem following the violent and destructive Jewish revolts. At Calvary, he covered the mound with earth and erected a large temple to Venus and it had fallen to Helena to take that building down, block by block.

The venerated Bishop Macarius of Jerusalem was Helena’s constant companion, spiritual advisor and it was he who had chosen the spot for excavation, once the ground was laid bare. A team of pick and shovel men (Syrians and Greeks for the most part) led by the foreman, an unctuous Syrian named Safar, had soon found an old, Jewish-style rock-cut tomb. Safar helped Macarius descend a ladder into the excavation pit and when the old bishop returned to Helena’s side he tearfully proclaimed it to be the Savior’s very tomb. Weeks later, at a nearby location, the diggers unearthed three sets of decayed and petrified timbers. Lifted from the pit and laid out for Helena’s inspection, she and Macarius joyfully declared them to be the crosses of Christ and the two thieves. But which one was Christ’s?

Macarius proposed a solution to the vexing problem.

Pieces of each cross were taken to the bedside of a cachectic woman dying from tumors in her belly. Firstly, one piece of wood was placed in her hand. Nothing happened. Likewise a second piece had no effect. But the third piece was miraculous. Clutching the splinter, her color went from yellow to pink and the swelling of her belly receded. She sat up, the first time she had been able to do so in ages and smiled.

They had found the True Cross.

Now Helena had one final quest before she could bundle up her relics and journey back to Rome. She sent the diggers back into the pit to find the nails of the crucifixion.

‘Will there be three or four?’ she asked Macarius.

The bishop sat beside her in the tent. ‘I cannot say, my lady. Some executioners preferred a separate spike for each ankle. Others speared both ankles with a single one.’

The bishop dutifully laughed. He had heard her say the same countless times.

Down in the pit and hidden from view, Safar watched his men scrape away at the earth beneath the spot where they had found the True Cross. His keen eye spotted something. He pushed the nearest man aside and continued the task with his handpick. Digging on his knees he exposed a large spike, black with oxida¬tion. It was as long as a man’s hand, quadrangular, with an intact, flat head. He was about to pull it out when his eye settled on a black dot a short distance away and soon he had exposed a second nail, this one shorter, with a broken tip. Then a man several feet away called out to him in Syrian. He had unearthed another nail and while Safar was cleaning along the shaft he noticed yet another trace of black. Soon four nails were exposed. The last one was missing half its head, apparently sheared off in its insertion or removal from the cross.

‘The lady will be pleased, no?’ the worker said to Safar.

‘I am sure she will be most pleased,’ Safar said, looking up at the pale sky. ‘Her work is done. She will leave us now.’

‘Will she give us coins?’ the worker asked.

‘She will give me a bag of coins and if you keep your mouth shut then I will give you a nice share.’

‘Keep my mouth shut about what?’

‘She will receive three nails only.’

‘What of the fourth?’

‘That one is mine,’ he said, pointing to the last found, the one with the broken head. ‘I have long endured laboring under the yolk of a woman.’

‘She is an empress.’

‘She is still a woman. This is my reward for the indignity. Besides, it is broken and she will accuse us of causing the damage. I will sell the relic. If you talk, you will die poor.’

Safar used his pick to loosen the dirt around the fourth nail, until he could pry it out. He greedily closed his fingers around it to feel its heft but he loosened his grip at once. There was a tingling sensation in his wrist, a slightly unpleasant warmth, and he quickly shoved the nail into the front pocket of his robe.

The other worker climbed from the pit and ran over to Helena’s tent.

‘Safar has found the nails, your majesty!’ he declared.

Helena’s wrinkled face lit up at the news. ‘How many?’ she asked, as Safar approached. ‘Three or four?’

Safar gave her a gap-toothed grin. ‘Three, your majesty. Only three.’

If you would like to purchase Sign of the Cross, you can do so by clicking on one of the following links below.