I’m delighted to be joining the blog tour for The Dead Wife by Sue Fortin on my blog today. With thanks to Rachel at Rachel’s Random Resources for inviting me to take part. 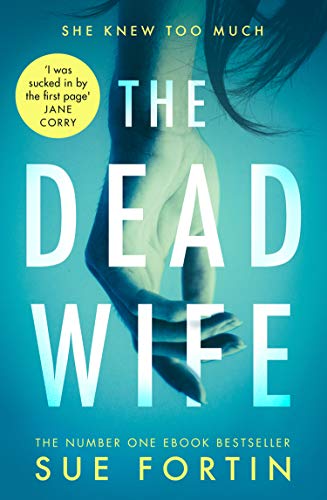 Police have ruled out suspicious circumstances in the investigation into the death of Elizabeth Sinclair, wife of charismatic entrepreneur Harry Sinclair, found drowned in the lake of the family’s holiday park.

It’s been two years since the Sinclair case closed but when reporter Steph Durham receives a tipoff that could give her the scoop of the year, she’s drawn deeper and deeper into the secretive Sinclair family.

Elizabeth’s death wasn’t a tragic accident. And the truth will come at a deadly price…

This was a really exciting read, I just had to find out what the truth was. The Sinclair family are certainly a group of people who you wouldn’t want to cross. I think if I’d have been in Steph’s position, I would have wanted to just forget about the whole issue and get out of the place. But then I liked Steph’s determination to find out what was really going on and to prove if Elizabeth’s death was really an accident once and for all.

As Steph continued to investigate what happened to Elizabeth, I really started to fear for her, particularly as she seemed to be getting close to uncovering what was going on. One of the characters in this book I really didn’t like was Dominic, and I kept thinking that he was going to do something terrible to Steph to stop her from investigating further. The Sinclair’s were an intriguing group of characters. We have Dominic, Harry and Owen who are in charge along with their mother, Pru at the helm. They’re certainly keen not to let anyone else in on their business, and it had me really thinking about what was going on their world and what they weren’t keen to let anyone else, no matter how close that person is to them, have a stake in. One of the things which Sue Fortin excelled at in her writing was in creating that real sense of danger.

As the story developed, I was able to guess what some parts of the final outcome was going to be, but it didn’t spoil my enjoyment. I flew through the last chapters as I couldn’t wait to find out what was going to happen to Steph, and I wanted to see if she would finally get to the truth.

One of the other parts of this story that I liked was Sue’s exploration of Steph’s relationship with her mother, Wendy. Her mother is just retiring from the police force. She worked on the original investigation into Elizabeth’s death. The scenes when Steph was having a conversation with Wendy about the case made me feel even more convinced that something terrible was going on behind the scenes.

This is the first book by Sue Fortin which I have read and I will certainly read more from her in the future. I’ll also be catching up on her previous books as well. If you’re a psychological thriller fan, I would definitely recommend this book.

If you would like to purchase The Dead Wife, you can do so by clicking on one of the following links below.