I’m delighted to be joining the blog tour for Stop at Nothing by Tammy Cohen on my blog today. With thanks to Anne Cater at Random Things Tours for inviting me to take part. 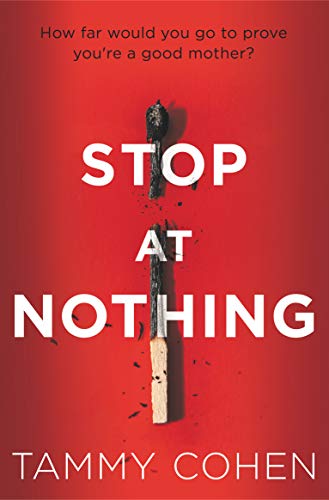 A mother’s job is to keep her children safe.

Tess has always tried to be a good mother. Of course, there are things she wishes she’d done differently, but doesn’t everyone feel that way?

Then Emma, her youngest, is attacked on her way home from a party, plunging them into a living nightmare which only gets worse when the man responsible is set free

But what if she fails?

So when Tess sees the attacker in the street near their home, she is forced to take matters into her own hands. But blinded by her need to protect her daughter at any cost, might she end up putting her family in even greater danger?

There’s nothing she wouldn’t do to make it right . . .

Stop at Nothing is a dark psychological thriller by Tammy Cohen about a mother’s quest to get justice for her teenage daughter after she was attacked on her way home from a party. It is also a story about trust and obsession. I’ve loved Tammy Cohen’s previous books so I couldn’t wait to start reading her latest. It took a very different direction to what I originally thought it would, and this is what made the story feel very original, especially the twist which came towards the end.

I was hooked right from the intense opening when Tess’s daughter, Emma, is at the police station after the police have called her in to try and identify her attacker. I really connected with Tess and her quest to get justice for Emma. It did feel like she was at the end of a tether as she attempted to try and make people listen. It seemed that people were trying to push her back all the time. There were times when I wanted someone to step in and help Tess, and I feared what was going to happen to her as she continued to try and get justice. And there were times when I wanted her to stop, to prevent anything bad happening to her and her family.

Tammy Cohen’s writing is very easy to get into. She always creates hugely engaging characters. The emotion in Tammy’s characters comes through very strongly in this book, especially in Tess as she is still struggling to come to terms with what has happened to her daughter. She is a character who I really felt for. I wanted her to get justice for her daughter. But there is also something else that has happened. She has an estranged relationship with her eldest daughter, and it is clear that something has happened in their past that has caused a rift between them. I was really interested in this part of the plot, and I wanted to know what had happened between them to cause this strain in their relationship.

There is a lot of tension in this book as Tess continues to investigate what happened to her daughter, and as she becomes infatuated with a man who she believes is the person responsible for what happened. Now, this was a part of the story which I was never quite sure about, and Tammy Cohen kept me on my toes as I kept wondering if this person was the culprit. I couldn’t believe some of the lengths that Tess was going to here, to try and bring this person to justice.

This is a book that certainly, for me, kept its secrets under wraps until the final pages. There’s a very sinister tone that made me think that all was not quite as it seems. There are some very dark characters who will keep you hooked and intrigued. Stop at Nothing is another top psychological thriller by Tammy Cohen. I can’t wait to read what she writes next.

If you would like to purchase Stop at Nothing, you can do so by clicking on one of the following links below.