I’m delighted to be taking part in the blog tour for Life Ruins by Danuta Kot on my blog today. With thanks to Anne Cater at Random Things Tours for inviting me to take part. 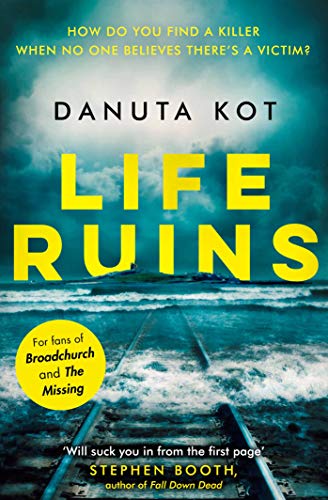 This is Broadchurch meets The Missing – hard-hitting, pacey and with modern social issues at its heart.

In a small northern town, girls are disappearing.
You won’t see it in the papers and the police aren’t taking any notice, but the clues are there if you know where to look.

Becca sees that something is wrong, but she’s been labelled ‘difficult’ thanks to her troubled past. So when a girl is so savagely beaten she can’t be identified, and Becca claims she knows who she is, no one will believe her.

With the police refusing to listen, Becca digs for evidence that will prove what she is saying. But her search for justice will put herself and those closest to her in danger – and once she finds the truth, will anyone even listen?

Life Ruins is a superbly written novel by Danuta Kot. With some very engaging writing and characters, this is an atmospheric story that will draw you effortlessly into the pages.

I think what Danuta Kot succeeds at most in this book, is the setting and her characters. Set in Whitby, and along the East Yorkshire coast, you really do get a sense of the seaside town, with its cliffs and the old mines left to crumble away. I could imagine the dark, twisty roads and the abandoned caravan site very crisply in my mind. It created a very spooky atmosphere. I could sense that dangerous people were lurking in the shadows. From that moment on, I wanted to know what was going on here.

I found the two lead characters, Jared Godwin and Becca Armitage very engaging. Both come from totally different backgrounds. Becca grew up in foster care and now works at a café which provides food and shelter to the homeless after being thrown out of university. She has a very close relationship with her foster parent, Kay, who lives alone after being recently made widowed, with her dog, Milo.

Jared, meanwhile, is a risk-taker. He enjoys living life on the edge, particularly by exploring abandoned mines and pushing himself even further to get that buzz of brushing close with death. But several years earlier he was involved in a devastating accident when his friend drowned which he holds himself personally responsible for. You can see just how much this affects him.

This is the kind of book which made me think, oh I’ll just read one more chapter, and then another, and another. As I mentioned, for me, it was the atmosphere and the characters that made this book particularly engaging. I was rooting for Becca and Jared. At first, you can’t see how their lives are going to come together. Danuta Kot does so in a very intriguing way when Jared witnesses a horrifying attack on a young girl who Becca believes is her friend. And from this point on a very dark story begins to emerge which puts Becca, Jared and Kay in very grave danger.

This is a very enjoyable and an engaging mystery. I would say that this book is more character-driven, but I was kept asking questions as the plot darkened. A lot of the time, it does feel that Jared and Becca are on their own in their quest to find answers. This is especially when the police didn’t seem to want to listen to what they had to say. Life Ruins is very well done.

If you would like to purchase Life Ruins, you can do so by clicking on one of the following links below.