I’m delighted to be joining the blog tour for The Holiday by T.M. Logan on my blog today.  With thanks to Tracy Fenton from Compulsive Readers for inviting me to take part. 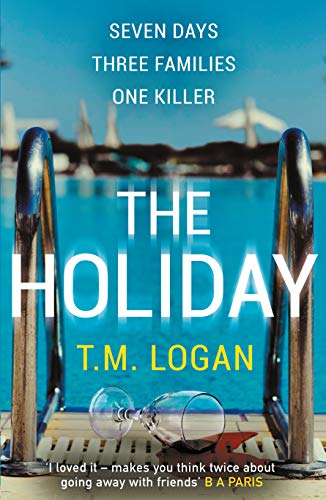 It was supposed to be the perfect holiday, dreamed up by Kate as the ideal way to turn 40: four best friends and their husbands and children in a luxurious villa under the blazing sunshine of Provence.

But there is trouble in paradise. Kate suspects that her husband is having an affair, and that the other woman is one of her best friends.

One of these women is willing to sacrifice years of friendship and destroy her family. But which one? As Kate closes in on the truth in the stifling Mediterranean heat, she realises too late that the stakes are far higher than she ever imagined.

Because someone in the villa is prepared to kill to keep their secret hidden.

Picture this scene, a picturesque, luxurious holiday retreat in France under a blazing summer’s sun. There’s a group of friends, tensions rise between then, secrets rise to the surface. Then a dead body is found.

T.M. Logan’s The Holiday is a riveting read and the perfect book to take away with you this summer. The scene is set perfectly. I was there among the characters at the luxurious villa, I could visualise so crisply the surrounding scenery, the rooms within the house and the infinity pool.

This book did feel very different from T.M. Logan’s first two books, both of which I found really gripping and I turned the pages as fast as I could. The Holiday is more of a slow-burner, but the suspense builds as tensions between the characters grow. We know that something bad is going to happen to one of the characters while they are away. I wanted to know who was going to be affected and what was going to happen. Would they all make it home?

Kate is the first person to start experiencing troubles when they arrive at the villa. They have been invited there by their friends, to celebrate a fortieth birthday. After spotting text messages popping up on her husband’s phone, Kate is convinced that he is having an affair. The texts insinuate that it is with someone who is part of their group. The idea is soul-crushing for Kate, but she has to put on a brave face and try and do some background digging on her own to find more evidence. She is the character who I originally felt for. I could see how hurt she was by the idea that her husband was having an affair, and I could sense her building frustration as she tried to get to the bottom of it. You can just see how fragile the relationships in the group are as the holiday gets going, and it does make for some very tense reading.

As the story builds T.M. Logan expertly reveals details about his characters. I could see that these are people who he has spent a lot of time thinking about and developing. There’s a real sense of growing unease, particularly as Kate tries to find out who her husband is having an affair with and everything comes together to form a devastating finale. While I found parts of the novel a little slow, I was gripped to the final chapters, and I was desperate to know what the final outcome was going to be.

The Holiday is a book that you can so very easily sink into and just become lost in the world within the pages. You’ll be whisked away in this well written and very absorbing book.

If you would like to purchase The Holiday, you can do so by clicking on one of the following links below.