I’m delighted to be joining the blog tour for Old Bones by Cynthia Harrod-Eagles today on my blog. With thanks to Holly at Blackthorn Books for inviting me to take part. 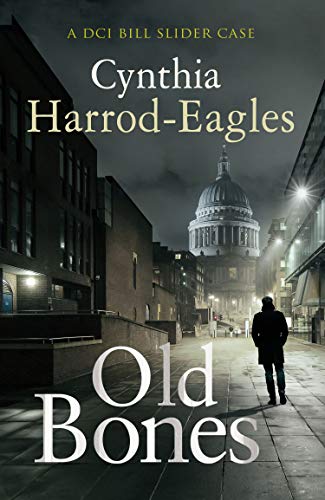 ‘You can’t upset anyone looking into old bones.’

DCI Bill Slider’s out of favour in the force – for accusing a senior Met officer of covering up an underage sex ring. As a punishment, he’s given a cold case to keep him busy: some old bones to rake through, found buried in a back garden, from a murder that happened two decades ago, and with most of the principal players already dead.

Old Bones by Cynthia Harrod-Eagles is a really good police procedural. When I started reading this book, I wasn’t aware that this was the nineteenth book in the DCI Bill Slider series. Although I may have missed out on some character development from the previous books, the story-line was very easy to follow. I had no trouble at all in settling into it.

The discovery of human remains in a back garden re-opens a haunting mystery which has never been solved. It dawns on the police that they may be the remains of fourteen-year-old Amanda Knight, who vanished decades earlier. She has never been seen since. The remains have been found in Amanda’s former home. A murder investigation is launched, and the police go back to square one to try and finally unearth what happened to her. Can they finally uncover the answers to this cold case?

I loved Cynthia Harrod-Eagle’s writing. Her description is what made her writing stand-out for me, and it pulled me into the story. The mystery here is really engaging as well. I kept thinking, as I was reading, that it was someone close to the girl’s family who knew the full truth. Cynthia had me peering a little more closely at all the characters directly linked to the crime, to see if they could be involved. I really enjoyed trying to work the mystery out.

After the discovery of the remains, the police have to go back to square one, and this means re-interviewing people, who were witnesses to the crime. Although this does prove tricky for the police as many have either moved on or passed away. It seemed to be painstaking work for the police as they had to sift through old information. But as they managed to trace people and after speaking to them, little details begin to emerge about what may have happened. There were some chilling revelations.

As the plot began to come together, I was able to guess the direction it was going to go, but I would never have thought of it right at the beginning of the book. As everything began to become clearer, I just had to read on to find out what was going to happen.

If you haven’t yet tried a book by Cynthia Harrod-Eagles, I would definitely recommend giving this book a go.

If you would like to purchase Old Bones, you can do so by clicking on one of the following links below.