I’m delighted to be taking part in the blog tour for Someone We Know by Shari Lapena. With thanks to Anne Cater at Random Things Tours for inviting me to take part. 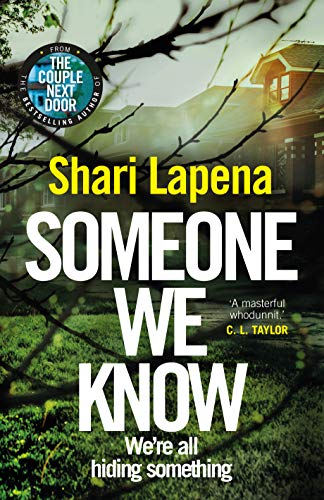 It can be hard keeping secrets in a tight-knit neighbourhood.

In a tranquil, leafy suburb of ordinary streets – one where everyone is polite and friendly – an anonymous note has been left at some of the houses.

‘I’m so sorry. My son has been getting into people’s houses. He’s broken into yours.’

Who is this boy, and what might he have uncovered? As whispers start to circulate, suspicion mounts.

And when a missing local woman is found murdered, the tension reaches breaking point. Who killed her? Who knows more than they’re telling? And how far will all these very nice people go to protect their secrets?

Maybe you don’t know your neighbour as well as you thought you did . . .

Imagine finding out that your teenage son has been breaking into your neighbour’s homes, just for the fun of it. Apparently, he doesn’t take anything, but he enjoys living on a dangerous edge, and sometimes he might take a look at their computers and mess around. I think I’d be mortified if I was in the position of Shari’s characters, Olivia and Paul. Their sixteen-year-old son, Raleigh has been doing just this. I don’t think I’d be able to look my neighbour in the eye again without feeling an incredible sense of guilt. And Olivia certainly feels this and is compelled to write apology letters to their neighbours.

But after Olivia and Paul discover what their son has been doing in his spare time, horrific news hits the neighbourhood. One of their neighbours, Amanda Pierce, is found murdered. Her body has been discovered in the boot of a car, in a lake, miles from her home. Amanda and her husband’s house is one of the properties Raleigh broke into.

Shari Lapena’s latest thriller, Someone We Know is very readable, and the story is very tense. After the discovery of Amanda’s body and after a full-blown murder investigation is launched, it’s clear that the police are going to find Raleigh’s fingerprints. I wasn’t particularly too concerned for Raleigh after he blatantly confessed to committing the crimes, but I felt for his parents, particularly Olivia. It did make me think that Raleigh could potentially be accused of Amanda’s murder. Olivia was, in my opinion, the strongest character in this book, particularly as her feelings came through very well in Shari’s writing.

All the characters, within the vicinity of the local area, fell under my suspicion. Shari Lapena cleverly weaved in the lies and deceit, which, when they came out, had disastrous consequences for the characters involved. There were many dislikeable individuals in this book, and I think the one person who I didn’t get on with from the start was Amanda’s husband, Robert. I could never quite make up my mind about him. All the way through, Shari kept me guessing, as I wondered if he could possibly be responsible for his wife’s murder.

This is a thoroughly enjoyable thriller about a neighbourhood pushed to the brink when shocking secrets emerge. Shari’s writing makes her book very gripping. I devoured half the book on my train travelling home one day. If you’re looking for a psychological thriller that will sweep you in from the first page and keep you hooked, I would definitely recommend it.

If you would like to purchase Someone We Know, you can do so by clicking on one of the following links below.