I’m delighted to be taking part in the blog tour for No Place of Refuge by Ausma Zehanat Khan. As part of the blog tour, I’m re-sharing my review of book two in the series, The Language of Secrets. With thanks to Anne Cater at Random Things Tours for inviting me to take part. 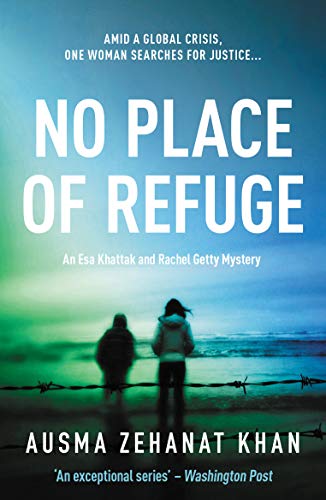 Amid a global crisis, one woman searches for justice…

In her wake, a French Interpol Agent and a young Syrian man are found dead at the Greek refugee camp where she worked.

Khattak and Getty travel to Greece to trace Audrey’s last movements in a desperate attempt to find her. In doing so, they learn that her work in Greece had strayed well beyond the remit of her NGO…

Had Audrey been on the edge of exposing a dangerous secret at the heart of the refugee crisis – one that ultimately put a target on her own back?

No Place of Refuge is a highly topical, moving mystery in which Khan sensitively exposes the very worst and best of humanity. Fans of the series will love this latest instalment.

MY THOUGHTS ON THE LANGUAGE OF SECRETS (BOOK TWO)

This is a novel I can easily give five stars to. The Language of Secrets is the first novel by Ausma Zehanat Khan, which I have read. Although her second book is part of a series featuring the same characters, it can easily be read as a stand-alone.

In The Language of Secrets, Ausma tells a powerful and absorbing tale which is very relevant to what is going on around the world today. The plot centres on the murder of a young Muslim man who has been working for the Canadian police as part of an undercover operation to expose a terrorist cell at a nearby mosque. Inspector Esa Khattak investigates the case. His partner, Rachel Getty goes undercover to try and expose a killer who may be among the congregation who worship at the mosque.

As I was reading, I thought it would be interesting to see how Esa’s relationship with the Muslim community would be affected. Many of them appear abhorred by what has happened, and they can’t speak highly enough of the victim. I imagined that some relationships he has would turn sour because of this.

There are some thought-provoking scenes in this book; I thought this particularly when Rachel was becoming acquainted with the members at the mosque. There is one scene in particular, which struck with me when they are discussing terrorism in all of its different forms. I think it is true that we associate acts of terrorism more with certain groups of people when it has happened throughout history. I thought Rachel’s undercover operation was one of the most gripping aspects of the story. You can see the worry that Khattak has for her as she becomes more absorbed in what has been happening at the mosque. There is tension here as you begin to fear that Rachel’s true identity will be discovered and you are fearful about what will happen to her.

There are some dramatic final scenes in this book which I thought gave the novel a satisfying ending. I was constantly wondering if the police were going to manage to stop the attack the terrorists were planning.

Although it is a heavy read at times, and it does tackle a difficult subject matter, I found The Language of Secrets to be utterly absorbing. It is a dark and engaging story that I’m sure will stay with you long after you finish reading.

If you would like to purchase No Place of Refuge, you can do so by clicking on one of the following links below.