I’m delighted to be sharing my thoughts on The Guilty Mother by Diane Jeffrey, her third psychological thriller. I’ve also reviewed her previous novel, He Will Find You on my blog and you can find my review by clicking here. 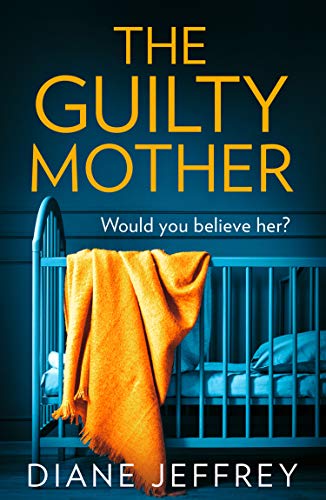 She says she’s innocent.
DO YOU BELIEVE HER?

Melissa Slade had it all: beauty, money, a successful husband and beautiful twin babies. But, in the blink of an eye, her perfect life became a nightmare – when she found herself on trial for the murder of her little girls.

Jonathan Hunt covered the original Slade Babies case for the local newspaper. Now that new evidence has come to light, Jon’s boss wants him back on the story to uncover the truth.

With Melissa’s appeal date looming, time is running out. And, as Jon gets drawn deeper into a case he’d wanted to forget, he starts to question Melissa’s guilt.

Is Melissa manipulating Jon or telling him the truth? Is she a murderer, or the victim of a miscarriage of justice?

And if Melissa Slade is innocent, what really happened to Ellie and Amber Slade?

I’ve been a fan of Diane Jeffrey’s work since I read her debut and I think The Guilty Mother is her best yet. The plot is intriguing. Former police officer, Melissa Slade is serving a prison sentence for the murder of her baby daughter. This occurred a few years after her youngest died from cot death. But Melissa’s family, particularly her ex-husband, is certain of her innocence and they have been campaigning for her release. Now they may finally have a chance to get her out after new evidence comes to light which may help prove her innocence.

Melissa is a character who I could never be sure about. I think my thoughts were influenced by Jonathan, a journalist for the local paper, who is asked to report on Melissa’s case. From very early on, Jonathan appears to decide that Melissa is guilty and he doesn’t seem to be very willing to report on her case. He fears that he may help a convicted murderer go free. This is what put an interesting spin on the story as I could see just how deeply this decision affected Jonathan.

The story gets going right from the first page when we see Melissa being escorted in a police van to court. There was so much tension in this scene. I felt as though I was there, watching everything unfold before my eyes. I wanted to know who this woman was and what the outcome of her trial was going to be. I wanted to know what she had done.  It makes for a very gripping opening.

Jonathan was a great character. I was interested in his own story as well as he has suffered his own devastating loss. I wondered if this was what influenced his own thoughts about Melissa’s case, and why he suspected she was guilty. I could certainly see why he didn’t want to be drawn into Melissa’s story. I also liked Jonathan’s colleague, Kelly. I’d definitely like to see her story explored further, Diane certainly leaves the ending open to that possibility.

There were many characters here who kept me thinking about what could have happened the night Melissa’s daughter died. I didn’t like her new husband, who gave me an icy feeling right from the moment Diane first introduces him. And I was also interested in who else had been in their home that fateful night. Diane kept me thinking about who was and who wasn’t telling the truth about that night.

The suspense and tension carries right the way through this book. I’m still thinking about those final scenes a few days after I finished reading it. The Guilty Mother is chilling, unpredictable and totally gripping. Diane’s writing will keep your eyes glued to the page. This is a brilliant read!

If you would like to purchase The Guilty Mother, you can do so by clicking on one of the following links below.