I’m delighted to be taking part in the blog tour for The Liar’s Sister by Sarah A. Denzil on my blog today. With thanks to Noelle Holten at Bookouture for inviting me to take part. 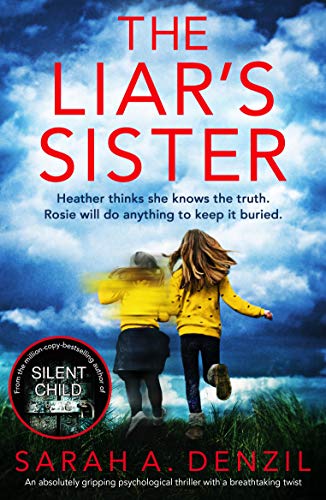 A SHOCKING DISAPPEARANCE. A VILLAGE FULL OF SECRETS.

Ten years ago, a family lost their son in the quiet village of Buckthorpe and he was never found.

Rosie Sharpe cried over her missing friend for weeks after.
But her little sister Heather knows that Rosie’s tears hide the truth.
Because the night Samuel was last seen, Heather watched her older sister climbing back through the window of their childhood bedroom. Her jacket torn, her eyes wild and her body trembling with fear.

Heather never told anyone what she saw, but secrets can’t stay buried forever…

A decade later, Rosie and Heather return to the home they grew up in when their mother falls ill. But when their house is ransacked and they receive a threatening note, it becomes clear that someone in the close-knit village doesn’t want them there.

When Heather finally confronts her sister about what really happened on the dark, rainy night Samuel vanished, Rosie’s version of the truth is more shocking than she could ever have imagined. But can she trust her sister? And who broke into their house that night? As the lies of the past begin to unravel, they have the power to put the lives of both women in terrible danger…

The Liar’s Sister is an intensely gripping novel about two sisters who are both connected to the disappearance of a teenage boy, Samuel, who went missing from their village many years earlier. Heather thinks her older sister, Rosie, is keeping something from her, and she believes that Rosie may know more than she’s letting on about what happened to Samuel.

There was such an intense atmosphere to this book. Heather and Rosie have returned to their home village, Buckthorpe because their mother is dying but what they don’t realise is just how unwelcome they’ll be made to feel. But they are determined not to be scared away from their home. Samuel’s disappearance has haunted the village, not least because of the rumours that were spread around about him by Rosie and her friends. But it has also haunted the memories of Heather. She has never forgotten the boy who she fell in love with those many summers ago.

There were some nasty people in this village. It seems that Heather and Rosie don’t know who they can trust. I wanted to know why people wanted them to move and why everyone seemed to have turned against them in the wake of their mother’s death. The characters in Buckthorpe didn’t paint the village as a very nice place to live, and it seemed to be a place that closed its ranks on outsiders.

Heather and Rosie don’t have a very close relationship with each other. I could feel Heather’s frustration at Rosie and her fear of her when she believes Rosie may be working against her. I could sense that Rosie wasn’t an easy person to confront, and this makes things even more difficult between them as Heather tries to find out once and for all what happened to Samuel.

The finale was so tense as the plot raced towards its conclusion. Everything becomes so much darker, and the final revelations are shocking. I thought at one stage I could see where the plot was going to go, but Sarah A. Denzil threw in a final brilliant twist which blew my mind. It was something I wasn’t expecting at all. The final twists are intricately woven into the plot in a very clever way.

The Liar’s Sister is the second book by Sarah A. Denzil, which I have read, and it earns a solid five stars from me. Sarah’s writing pulled me easily into the story, and I couldn’t wait to find out how it was going to end. The characters especially made this book gripping, although I think it was Heather who I connected with the most out of the two sister’s.

Dark and compulsive and with some very unsettling truths, The Liar’s Sister is a totally engrossing read.

If you would like to purchase The Liar’s Sister, you can do so by clicking on one of the following links below.

One thought on “The Liar’s Sister by Sarah A. Denzil #bookreview books on tour @sarahdenzil @bookouture”