I’m delighted to be joining the blog tour for Little Siberia by Antti Tuomainen. With thanks to Anne Cater from Random Things Tours for inviting me to take part. 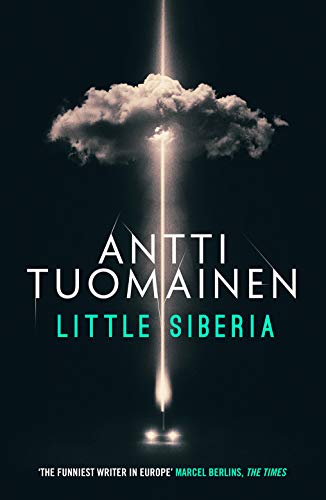 The arrival of a meteorite in a small Finnish town causes chaos and crime in this poignant, chilling and hilarious new thriller from the King of Helsinki Noir

A man with dark thoughts on his mind is racing along the remote snowy roads of Hurmevaara in Finland, when there is flash in the sky and something crashes into the car. That something turns about to be a highly valuable meteorite. With euro signs lighting up the eyes of the locals, the unexpected treasure is temporarily placed in a neighbourhood museum, under the watchful eye of a priest named Joel.

But Joel has a lot more on his mind than simply protecting the riches that have apparently rained down from heaven. His wife has just revealed that she is pregnant. Unfortunately Joel has strong reason to think the baby isn’t his. As Joel tries to fend off repeated and bungled attempts to steal the meteorite, he must also come to terms with his own situation, and discover who the father of the baby really is.

Transporting the reader to the culture, landscape and mores of northern Finland Little Siberia is both a crime novel and a hilarious, blacker-than-black comedy about faith and disbelief, love and death, and what to do when bolts from the blue – both literal and figurative – turn your life upside down.

A simple lump of rock, travelling for billions of years across the universe finally makes its mark on Planet Earth, choosing to make icy cold Finland its destination. But this simple lump of rock is about to cause a storm among the locals. With an estimated worth of one million euros, it catches the eye of more than a few crooks, who are desperate to get their hands on it before it makes its journey to London. Charged with protecting the meteorite is Pastor Joel Huhta, a former soldier who takes up the duty of night watchman. And this simple lump of rock is about to turn his life on its hinges.

What I loved about this book was how fresh the story felt. Antti Tuomainen has a real talent for putting a different spin on a thriller, and he does this here by choosing a hero who you wouldn’t expect, and this is what I like about his writing. It certainly is never predictable.

The language is very poetic, and once again, I was drawn into the icy, Finnish landscape. The last book I read by Antti Tuomainen was The Man Who Died. The writing makes you experience the cold, the chill coming off the frozen lakes and the deep drifts of snow.

Little Siberia does appear to have a darker, more sinister edge to it, in my opinion, and this is what drew me into the story. Antti Tuomainen is a writer known for his humour, and while this is still here, I thought that the darkness came through much stronger. Pastor Joel goes through a lot in this book, I really was wondering how he had the ability to keep going, but this was what I admired about his character. He isn’t a character who will very easily back down.

I thought Pastor Joel was such a brilliant character to explore, and there are so many aspects about him that make him interesting. He is a former soldier and has experience of fighting in the field. This part of his life intrigued me. He came from a deeply religious family, and I wanted to know what prompted him to join the army. Not only does he have to worry about crooks who are attempting to get their hands on the meteorite, but his wife has suddenly announced that she’s pregnant. He has so far neglected to tell her that he can’t have children, so he knows the baby can’t be his.

Little Siberia is a deeply chilling novel with a cast of brilliant, well-formed characters to follow. With atmospheric and gripping writing, what more could you want from a novel? This book definitely comes highly recommended from me. One of my favourite reads of the year.

If you would like to purchase Little Siberia, you can do so by clicking on one of the following links below.