I can’t believe we’re nearly at the end of the year. As the party season gets underway it also means that the First Monday Crime Christmas special is back. The details you need to remember are that the date is Monday, 2nd December 2019, the time is 18:30 p.m. and the location is City University, London.

There is a much more cosy feel to this month’s panel, which is perfect for the long winter nights

This month’s panel is being sponsored by Severn House Publishing who are very kindly providing wine and there will also be cookies courtesy of cookie maker extraordinaire, Joy Kluver. The panel is also being moderated by Jake Kerridge.

But that’s not all, there is also a special, Christmas themed event taking place, Criminal Mastermind featuring Angela Clarke and Claire McGowan.

So who’s appearing next month?

One man is caught up in a lethal global conspiracy in this explosive spy thriller.

When ex-Marine Jack Ford receives a letter containing news of a daughter he never knew he had, he feels compelled to return to China, a country he hasn’t visited since 1989 when, as a young American spy, he fell in love with a beautiful student activist and found himself caught up in the horrors of the Tiananmen Square massacre. But why has Xia got in touch now, after a thirty-year silence?

On arrival in Beijing, Jack finds himself accidentally in possession of an explosive piece of information both the Chinese and American governments are desperate to get their hands on. Alone in a strange city, suspected of being a traitor by his own side, not knowing whom to trust, Jack is faced with an impossible dilemma: should he save his new-found daughter or prevent a new world war from breaking out?

Simon Brett author of The Killer in the Choir

When Jude joins the Fethering community choir, she discovers that at least one of her fellow choristers is hiding a deadly secret.

Although she hadn’t known Leonard Mallett very well, nor liked him particularly, Carole Seddon feels duty bound to attend her fellow committee member’s funeral. As she suspected, the hymns, readings and sermon are all very predictable – not unlike Leonard himself. What she couldn’t have predicted was that the deceased’s daughter would use the occasion to publicly accuse her stepmother of murder.

Did Heather Mallett really kill her husband, as many Fethering residents believe? Deciding to get to the heart of the matter, Carole’s neighbour Jude joins the new community choir – and discovers that amidst the clashing egos and petty resentments lurk some decidedly false notes. At least one chorister would appear to be hiding a deadly secret – and it’s up to Carole and Jude to unearth the truth.

Tarquin Hall author of The Case of the Reincarnated Client

A client claiming she was murdered in a past life is a novel dilemma even for Vish Puri, India’s Most Private Investigator. When a young woman comes forward claiming to be the reincarnation of Riya Kaur, a wife and mother who vanished during the bloody 1984 anti-Sikh riots, Puri is dismissive. He’s busy enough dealing with an irate matrimonial client whose daughter is complaining about her groom’s thunderous snoring. Puri’s indomitable Mummy-ji however is adamant the client is genuine. How else could she so accurately describe under hypnosis Riya Kaur’s life and final hours? Driven by a sense of duty – the original case was his late father’s – Puri manages to acquire the police file only to find that someone powerful has orchestrated a cover-up. Forced into an alliance with his mother that tests his beliefs and high blood pressure as never before, it’s only by delving into the past the help of his reincarnated client that Puri can hope to unlock the truth.

Sam Blake author of Keep Your Eyes on Me 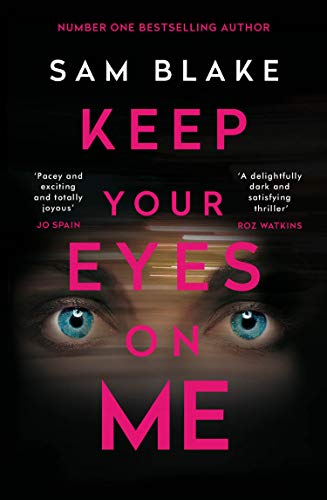 You won’t be able to look away

When Vittoria Devine and Lily Power find themselves sitting next to each other on a flight to New York, they discover they both have men in their lives whose impact has been devastating. Lily’s family life is in turmoil, her brother left on the brink of ruin by a con man. Vittoria’s philandering husband’s latest mistress is pregnant.

By the time they land, Vittoria and Lily have realised that they can help each other right the balance. But only one of them knows the real story…

Tickets are absolutely FREE and you can reserve your space by clicking on the following link below.

The nearest tube stations are Farringdon and Angel. Afterwards we will be heading over to the Dame Alice Owen for a drink.