I’s my pleasure to be taking part in the blog tour today for The Pact by Amy Heydenrych. With thanks to Tracy Fenton from Compulsive Readers for inviting me to take part. 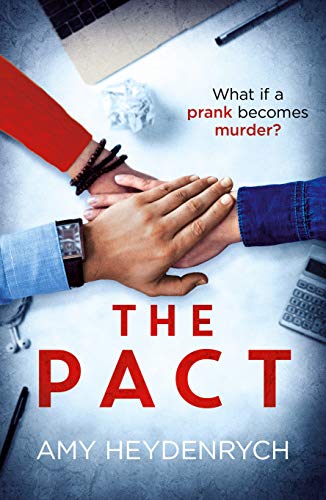 What if a prank leads to murder?

When Freya arrives at her dream job with the city’s hottest start-up, she can’t wait to begin a new and exciting life, including dating her new colleague Jay.

However, Nicole, Jay’s ex and fellow employee, seems intent on making her life a misery. After a big deadline, where Nicole continually picks on her, Freya snaps and tells Jay about the bullying and together they concoct a revenge prank.

The next morning, Nicole is found dead in her apartment . . .

Is this just a prank gone wrong? Or does Freya know someone who is capable of murder – and could she be next?

The Pact is a highly engaging novel by Amy Heydenrych, and I was quickly pulled into the lives of her characters. It did make me think about how I would have reacted if I was in their shoes when the plot started to unfold. What Amy Heydenrych also, so cleverly does, is she makes you re-examine everything you thought you knew about her characters. Nothing is as it seems in this book.

This was a really intense read. I felt this right from the beginning when the body of a young woman, Nicole is discovered at her flat, and when Amy Heydenrych takes us back in time to reveal the person who she was. As Amy started to reveal more about her, I started to evaluate every other character in the book as I tried to work out who killed Nicole. From very early on, she doesn’t come across as the most likeable of characters, so it seems that there are plenty of people out there who may have a motive to kill her. As Amy begins to reveal more details, you really do get the sense that something sinister is going on behind the scenes.

Every single character in this book kept me engaged. The story is told primarily through the viewpoints of Freya, a woman who briefly worked with Nicole and Isla, a journalist reporting on the case. What I thought I was down really well here were the two timelines. Amy switches between several weeks prior to Nicole’s death and the present, but this didn’t in any way feel confusing to me, and I was able to keep up with everything that was going on.

There were characters who I didn’t trust right from the start, but I don’t want to reveal too much about this as I don’t want to spoil the story. When you start to read this book, you will soon know who I mean. Amy Heydenrych does take us on a twisty ride, and there were a couple of big reveals that completely surprised me. I became so invested in the characters that I thought I had the plot worked out until Amy threw a spanner into the works. This made the ending so exciting as everything that had been held from us, the reader, began to unravel.

This novel also deals with many moral issues, such as the ‘me too’ movement. There is also an intense storyline that ensues when Freya starts receiving disturbing messages, and she begins to think this may have a possible link to Nicole’s death. Is the same person who killed Nicole also targeting her?

Although I found parts of the novel a little slow, I was kept fully engaged. It was maybe a little longer than I felt it needed to be, but I thought everything was wrapped up well, and it made for a very satisfactory ending. Overall, an excellent read!

If you would like to purchase The Pact, you can do so by clicking on one of the following links below.