I’m delighted to be joining the blog tour for What She Saw Last Night by MJ Cross. With thanks to Tracy Fenton from Compulsive Readers for inviting me to take part. 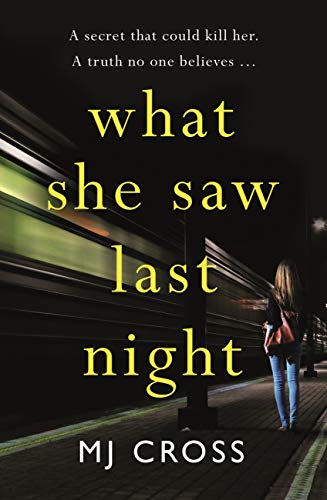 A secret that could kill her.

A truth no one believes…

Jenny Bowen is going home. Boarding the Caledonian Sleeper, all she wants to do is forget about her upcoming divorce and relax on the ten-hour journey through the night.

In her search for her cabin, Jenny helps a panicked woman with a young girl she assumes to be her daughter. Then she finds her compartment and falls straight to sleep.

Waking in the night, Jenny discovers the woman dead in her cabin … but there’s no sign of the little girl. The train company have no record of a child being booked on the train, and CCTV shows the dead woman boarding alone.

The police don’t believe Jenny, and soon she tries to put the incident out of her head and tells herself that everyone else is right: she must have imagined the little girl.

But deep down, she knows that isn’t the truth.

What She Saw Last Night by MJ Cross is a rollercoaster of a read. When you start reading this book, you better make sure that you don’t have any immediate plans as you won’t want to put it down.

We meet our protagonist Jenny in the opening chapters of the book. She is travelling on the sleeper train from London to Scotland. But what she doesn’t realise is how much of an impact this journey will have on her life. During the journey, Jenny discovers the body of a woman she met while boarding, a woman with a little girl who Jenny presumes is her daughter. The police suspect it was suicide, but Jenny suspects otherwise. But what is even more perplexing is what happened to the girl who Jenny saw the woman with? The girl seems to have vanished into thin air, and no one will believe Jenny, including the police, that she even saw her. There is no evidence to suggest the girl was even there. Could Jenny have imagined seeing her? As things start to get more complex, Jenny is determined to find out who the girl is and what happened to her. And by doing so, she puts herself in very grave danger.

This book had me hooked right from the very first pages, and I finished in just a couple of days. I really wanted to find out what had happened to the girl on the train. I was thinking right from the beginning that there must be a cover-up going on behind the scenes. The story behind the girl’s strange disappearance became far more mysterious than I thought it would.

There is tension right from the get-go in this book. I thought this particularly as I began to sense that there were people out there who were determined to silence Jenny and I wondered if possibly any members of the police force could possibly be involved. This is what I loved about this read. I was kept guessing right the way through, and MJ Cross kept on tightening up the tension and throwing more obstacles in Jenny’s way as she fought to find answers. You can feel just how strong Jemmy’s determination is. It made me think how I would react if I was in Jenny’s situation, would I let the situation just be forgotten about or would I be brave enough to speak up?

This is a really suspenseful read right the way through that kept me turning the pages. And then MJ Cross hits you with twist after twist, one scene, in particular, left me reeling. What She Saw Last Night is compulsive and hugely engaging. Top stuff!

If you would like to purchase What She Saw Last Night, you can do so by clicking on one of the following links below.