Welcome to my first post of 2020 and I’m delighted to be joining the blog tour for A Dark Matter by Doug Johnstone. With thanks to Anne Cater from Random Things Tours for inviting me to take part. 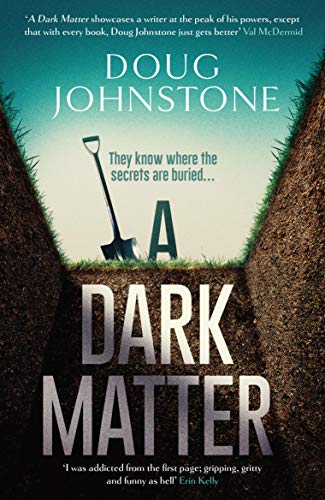 When patriarch Jim dies, it’s left to his wife Dorothy, daughter Jenny and granddaughter Hannah to take charge of both businesses, kicking off an unexpected series of events.

Dorothy discovers mysterious payments to another woman, suggesting that Jim wasn’t the husband she thought he was. Hannah’s best friend Mel has vanished from university, and the simple adultery case that Jenny takes on leads to something stranger and far darker than any of them could have imagined.

As the women struggle to come to terms with their grief, and the demands of the business threaten to overwhelm them, secrets from the past emerge, which change everything…

A compelling, tense and shocking thriller and a darkly funny and warm portrait of a family in turmoil, A Dark Matter introduces a cast of unforgettable characters, marking the start of an addictive new series.

Doug Johnstone is fast becoming one of my favourite writers. His previous book, Breakers, was one of my top reads of 2019 and he has pulled it off again with A Dark Matter.

I think this book has one of the most original openings I’ve read in a long while. I did have to go over the first two sentences a couple of times as it dawned on me what was happening. Doug Johnstone pulls you into his story with a somewhat disturbing opening as a corpse is being fried. This opening scene grabbed my attention, and I wanted to know what the hell was going on here. But the opening scene isn’t quite as sinister as you might think; there are a lot more sinister scenes to come.

In Doug’s last book, I loved the raw, authentic voice he gave to his characters. In this book, we meet a family who own a funeral home, the Skelfs, which also operates as a private detective agency. I really liked this idea. It did give the book a Miss Marple and an Inspector Poirot kind of feeling.

Hannah, who is the granddaughter of Dorothy, who now solely owns the business after the death of her husband, Jim, is distraught when her friend Mel disappears. She begins investigating Mel’s disappearance on her own and takes matters into her own hands when it appears that the police show little interest. Hannah is tough and is absolutely determined to find out what has happened to her Mel. But meanwhile, another mystery is taking up her mother’s time.  Hannah’s mother, Jenny, has found out that the business is still paying money to the wife of a former employee who also strangely disappeared. She can’t understand why the business is still paying this money and begins to suspect that her father, Jim, may have had a hand in his disappearance. Did he reach an agreement with his former employee’s wife to keep her silent on the matter?

I did think that A Dark Matter didn’t have the same, quite high level of tension as Breakers did, but I did become utterly immersed in the story. It is quite a different book, and it does stand out, it’s hard to place it into just one genre. Doug really captures Hannah’s anger as she searches for answers behind Mel’s disappearance, and also in Jenny’s despair, as she tries to work out what has been going on behind her back within the business. Doug Johnstone has a real talent for giving his characters strong, emotional depth which really brings them to life and makes them feel like real people.

You will be rooting for the characters to reach the answers that they are desperately craving. A Dark Matter is a totally original novel that will have you begging for the next chapter in the series. Fantastic writing!

If you would like to purchase A Dark Matter, you can do so by clicking on one of the following links below.