Over the Christmas break I finally found the time to catch up with one of my favourite police procedural series.

Deadland is the second book in William Shaw’s Alexander Cupidi series and it is really good. 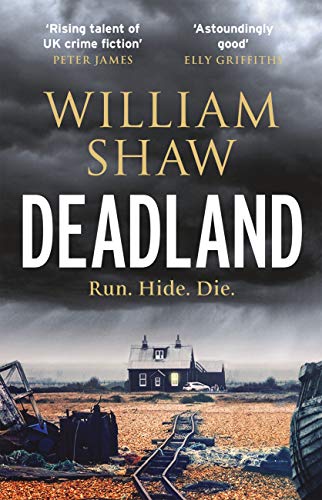 The two boys never fitted in. Seventeen, the worst age, nothing to do but smoke weed; at least they have each other. The day they speed off on a moped with a stolen mobile, they’re ready to celebrate their luck at last. Until their victim comes looking for what’s his – and ready to kill for it.

On the other side of Kent’s wealth divide, DS Alexandra Cupidi faces the strangest murder investigation of her career. A severed limb, hidden inside a modern sculpture in Margate’s Turner Contemporary. No one takes it seriously – not even the artwork’s owners, celebrity dealers who act like they’re above the law.

But as Cupidi’s case becomes ever more sinister, as she wrangles with police politics and personal dilemmas, she can’t help worrying about those runaway boys. Seventeen, the same age as her own headstrong daughter. Alone, on the marshes, they’re pawns in someone else’s game. Two worlds are about to collide.

Kent and its social divisions are brilliantly captured in Deadland, a crime thriller that’s as ingeniously unguessable as it is moving and powerful.

DS Alexander Cupidi is back in William Shaw’s latest novel, Deadland. This is a series which keeps going from strength to strength, and I have been captivated since Alexander Cupidi made her first appearance in The Birdwatcher.

What I really liked about the latest book in this series is that we see the return of former police officer, William South. When we last saw him, Alexander Cupidi had handed him in to the police after discovering the truth about his dark past. When I read The Birdwatcher I thought he was one of the best characters in crime fiction which I’ve come across, so I was really pleased to see him return in this book, but he is slightly different in his latest appearance. He seems to be struggling to re-adapt to life outside of prison. He’s never going to be viewed in quite the same way, particularly by his old friends. Alexander is keen to keep an eye on him. This is not least because she thinks that by having William around it might stop her daughter, Zoe, from going down a slippery path.

While keeping an eye on William and her daughter, Alex is up to her eyeballs in a new investigation. A severed arm has been discovered at an art gallery, and it proves very difficult for Alexander and her team to get identified. But that’s not all that she is faced with. There is also the disappearance of two teenagers who Alex believes could be in grave danger. It soon becomes clear to Alex and her team that the cases could be connected.

What I think is really good about William Shaw’s writing is how he makes us care for the characters. In the opening chapters, he introduces us to two teenagers who are targeting people so that they can steal their phones and sell them on. This is something which is quite frequently spoken about on the news as well. It is quite frightening to think about how easy this can be done and how easily people can get away with this crime. It does make you think about how careful you have to be when you’re out in public. I think this was why I didn’t think much of them towards the beginning of the book, but as the novel progressed, I felt quite sorry for them. William Shaw makes you realise that there are deeper root causes which have lead them to do this. It’s only when they pick on the wrong person do the tables finally turn for them, and their luck runs out.

Once again William Shaw also brings the setting of the Kent coastline to life, creating an atmospheric landscape. If you haven’t yet read this series and if you’re a fan of police procedurals then you really need to move William Shaw’s books to the top of your list. Deadland is cleverly constructed, and it grips you from the first page. Excellent from start to finish.

If you would like to purchase Deadland, you can do so by clicking on one of the following links below.