Someone You Know is another book I read over Christmas and it’s one I’ve been meaning to get to now for a while. 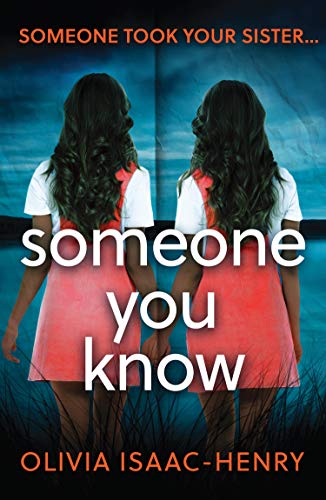 You can trust your family, can’t you…?

She has spent the last twenty years building a life away from her fractured family, desperate to escape the shadow of the past.

Only now she needs to confront the huge hole her sister’s disappearance left in her life, because a body has been found. The police are shining a spotlight on the Piper family. And secrets are about to surface.

After all, it’s common knowledge that more often than not, these crimes are committed by someone close to the victim. Someone they trust. Someone they know…

What really happened to Edie Piper?

Tess’s twin sister, Edie disappeared twenty years ago without a trace. Tess and her family have searched for answers ever since. As time has moved on, though, the public and the media have forgotten about them. This is until a body is discovered weighted down at the bottom of a reservoir, not far from where Edie was last seen. Tess and her dad have to once again go through the painful process of going with the police to identify the body, hoping that it is someone else and that Edie could still be out there somewhere. But the police are confident that this time it is Edie who they have found and the discovery will change Tess and her family’s lives forever.

Olivia Isaac-Henry’s debut novel, Someone You Know is very twisty. Tess is a character who I really connected with. She is someone who has suffered a lot in her past. This is including the struggle to move on after the disappearance of her twin. Tess always felt as though she was in Edie’s shadow. Her sister was always more popular than her at school, whereas Tess struggled to fit in. Tess stuck close to her twin, but even Edie seemed to resent her as she found Tess an embarrassment in front of her friends. Olivia Isaac-Henry brings Tess’s frustrations to life really well, particularly in the flashback scenes when we revisit her childhood.

There are a lot of characters who come under suspicion in this book, members of Edie’s family and her friends. Olivia Isaac-Henry kept the suspense turning up a notch, and as new people fell under the spotlight, I could never be sure which direction the plot was going to go. Towards the end, I thought I could see where it was going, but Olivia managed to thwart my suspicions in the final chapters.

There is a lot of emotional depth to this book. Tess has to come to terms with a lot of secrets that have been kept buried. You can really sense what Tess is going through as the search for Edie’s killer progresses and she is keen to make sure that her sister isn’t forgotten this time.

I really liked this book. Olivia’s writing kept the pace flowing forward, and I was intrigued to find out what the final outcome was going to be. Someone You Know is a strong debut, and I’m looking forward to reading Olivia’s next book.

If you would like to purchase Someone You Know, you can do so by clicking on one of the following links below.

One thought on “Someone You Know by Olivia Isaac-Henry #bookreview”