Hold Your Tongue is a debut I was really looking forward to reading and I was glad I managed to find the time to do so over Christmas. 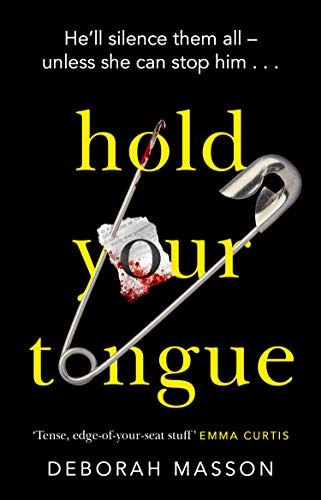 In the run up to Christmas, a serial killer stalks the streets of Aberdeen . . .

On Detective Eve Hunter’s first Monday back at work following enforced leave, she is called to the scene of a gruesome crime. A young woman’s body has been discovered in a hotel room, her face mutilated and her tongue cut out. A newspaper headline about the victim’s burgeoning modeling career is pinned to the body.

Hunter and her team spend the week chasing leads, until the following Tuesday, another body is discovered in similar circumstances. Again, a newspaper headline about the victim is found on the scene.

When a breakthrough with the newspaper clippings leads them to a clue about the killer’s pattern, they realize the countdown is on until the next victim is found. Battling against a team who has lost respect for her and her own personal demons, Hunter must put herself inside the mind of a depraved killer if she is to prevent another terrible death . . .

When I first read the blurb for Hold Your Tongue, I knew this was going to be a book for me. For me, it was the premise of this novel that drew me to it, and I found the idea really chilling.  It also introduces us to a new police team in Aberdeen, Scotland, and a lead detective who has an intriguing backstory that will hook you in from the first few pages.

Serial killers have been known to take items from their victims, a sort of trophy to remind themselves of the crime they have committed, their victims, and as well, perhaps, to taunt the police. Deborah Masson’s killer takes this up an even more disturbing notch. The killer in her book chooses to remove the tongues from their victims. Detective Inspector Eve Hunter has recently returned to work and is faced with the horrific case; she isn’t in the best stable mind herself. A few months ago she was considered by many on her team to be responsible for a serious attack on one of her colleagues which left her paralysed. Eve has never been able to forgive herself for her part in what happened.

It did feel as though Eve was very much on her own in this book. Many of her colleagues seemed to be against her return to the force. Eve feels incredible guilty herself about what happened. The investigation which Eve and the team are faced with is complex. Along the way, there are some hard-hitting truths which make it very disturbing for the team to investigate. I really connected with Eve, and I wanted things to get better for her, especially in her team. I wanted someone to tell her that what had happened wasn’t her fault.

For me, I felt that the pace did slow down quite a bit after the discovery of the first body, but it does pick up again. Deborah Masson maintains the tension well as the investigation picks up new leads. All the time though I kept wondering, who was carrying out these crimes? Who would be so sick to remove their victim’s tongues? What purpose did this serve to the killer? If this is the idea that Deborah Masson has brought us in her first book, it does make me wonder what she has in store for us next.

Hold Your Tongue is a very gritty debut by Deborah Masson which will chill you to the bone. Deborah Masson is a strong new talent who I will be keeping an eye out for. I’ll definitely be looking out for more from this series, and I’m intrigued to know where Deborah will take Eve and the rest of her team next.

If you would like to purchase Hold Your Tongue, you can do so by clicking on one of the following links below.

4 thoughts on “Hold Your Tongue by Deborah Masson #bookreview @deborah_masson”