I’ve become a huge fan of Mel Sherratt’s DS Grace Allendale series and I’m delighted to be sharing my review of her latest book, Liar Liar as part of the blog tour. With thanks to Sanjana Cunniah at Avon Books for inviting me to take part. 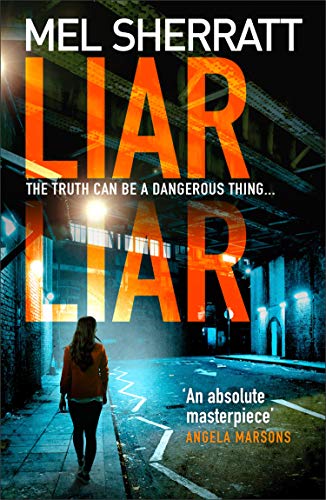 The truth can be a dangerous thing…

When a young boy falls from a balcony in a block of flats, DS Grace Allendale witnesses the shocking aftermath of the tragic event. But strangely, no one will admit to seeing anything – and the parents will only tell the police that it was an accident.

Determined to sort the truth from the lies, Grace is thrown into a case that takes her to the darkest corners of the criminal world – and strikes closer to home than she could have ever imagined…

Liar Liar is such an intense read by Mel Sherratt. Opening with the horrific scene of a small boy falling from a five-meter high railing, DS Grace Allendale is thrown into a difficult and frustrating investigation. It is clear that there is more to what happened than what first meets the eye, but there are very few people who are willing to come forward to tell the police what they know. Grace even suspects that the boy’s parents are keeping secrets from her. But who has such a tight hold on this community? Why are the boy’s parents, Luke and Ruby so afraid?

What makes Mel Sherratt’s lead detective so fascinating is that she has links to a local criminal gang who are at the top of the pecking order. Some of the ruthless criminals Grace has come across in her career are scared of them. Grace has only recently become reacquainted with her family, and you can see that it is tough for her. This is what makes Grace so intriguing to me, and I’m really keen to see this part of her life develop further. How long will they be able to keep acting harmoniously towards each other? We don’t hear much from them in the latest book in the series, but there are references to them, you quickly get the sense that they are a family not to be crossed with.

Liar Liar is very tightly plotted. There are a lot of lies that run very deep in some of the characters in this book. It’s no easy task for Grace, who has to try and wring them out of the witnesses to piece together what happened to the young boy. I could see just how frightened his parents were, and I wanted to get to the bottom of what was keeping them from telling the police everything. When the reveals did come, I thought they were very convincing. You can tell that Mel Sherratt has put a lot of thought into this and into sketching out the lives of her characters.

A part of the novel I also liked, were the flashback scenes, where we visit Ruby ten years earlier. Mel Sherratt built this part of the plot really well. As I started reading these scenes, my mind kept jumping ahead to what was happening in the present as I tried to work out how the two timelines were going to marry up.

The majority of the novel is set in a block of flats called Harrison House. Throughout the entirety of the book, it felt as though a dark cloud was hanging over it. There seemed to be danger at every corner here. Mel Sherratt painted a really gloomy atmosphere, but there is also some lightness and a sense of community, particularly, I thought with Luke and Ruby’s neighbour.

Liar Liar is another absolutely gripping read by Mel Sherratt with great characters who you will be rooting for. Very, very good!

Liar Liar is available to buy from the following retailers: