I’m delighted to be sharing my review of The Holdout by Graham Moore as part of the blog tour. With thanks to Tracy Fenton from Compulsive Readers for inviting me to take part. 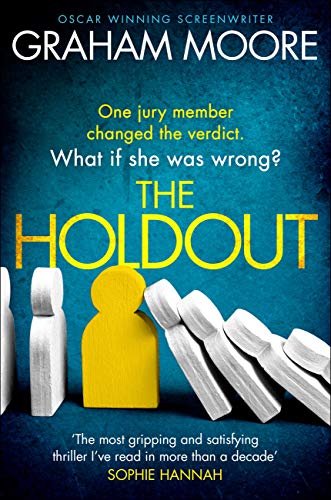 One juror changed the verdict. What if she was wrong?

‘Ten years ago we made a decision together…’

Fifteen-year-old Jessica Silver, heiress to a billion-dollar fortune, vanishes on her way home from school. Her teacher, Bobby Nock, is the prime suspect. It’s an open and shut case for the prosecution, and a quick conviction seems all but guaranteed.

Until Maya Seale, a young woman on the jury, persuades the rest of the jurors to vote not guilty: a controversial decision that will change all of their lives forever.

Ten years later, one of the jurors is found dead, and Maya is the prime suspect.

The real killer could be any of the other ten jurors. Is Maya being forced to pay the price for her decision all those years ago?

The Holdout is a very immersive novel by Graham Moore. It follows the members of a jury in the wake of a decision they made nine years ago which many, nationwide in America, deem scandalous. One member of the jury, Rick, is racked with guilt. He believes that he was hoodwinked and went against his conscience in deciding to find a man suspected of murder, not guilty. He is determined to bring the jury members back together and reveal new evidence about the case which he has uncovered. But someone is keen to make sure that whatever it is Rick finds, that it remains buried.

I really enjoyed this. From the beginning, I could never be sure if Bobby Nock, the man who was found not guilty of the murder of his student in 2009, was guilty or innocent. Graham Moore kept me guessing, and I wanted to know what evidence, if any, Rick, had supposedly uncovered. Would it be enough to convince the rest of the group of his belief that Bobby was indeed guilty?

I have to say that when I got to the end of this book, one revelation completely floored me, and I don’t think I’ll be forgetting about it for a while. I was expecting it to go one way and Graham Moore pulled the rug out from under my feet. It was very well done, and it didn’t make me feel that that wouldn’t be believable.

Maya was a character who I got on with from the start. Like Rick is with his belief, Maya is steadfast in hers that Bobby is innocent. But her own thoughts on the case throw a spanner in the works when the plot takes an unexpected direction, leaving Maya in a perilous situation that will have a huge impact on the rest of her life. I was rooting for Maya all the way through. I wanted her to succeed in what she was doing, and I had a lot of suspicions about the other members of the jury.

This novel is very well done, and I found the ending very satisfactory. A top read for me!

If you would like to purchase The Holdout, you can do so by clicking on one of the following links below.

2 thoughts on “The Holdout by Graham Moore #bookreview blog tour”