I’m delighted to be joining the blog tour for Containment by Vanda Symon on my blog today. With thanks to Anne Cater from Random Things Tours for inviting me to take part. 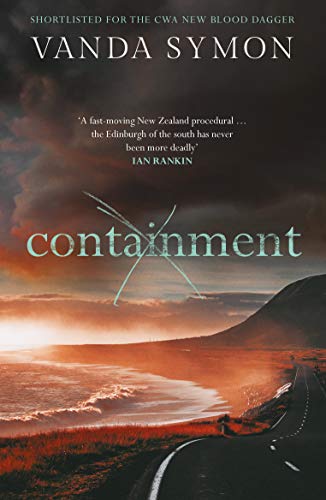 Dunedin’s favourite young police officer Sam Shephard is drawn into a perplexing investigation when a series of shipping containers wash up on a sleepy New Zealand beach, and a spate of unexplained deaths ensues…

Chaos reigns in the sleepy village of Aramoana on the New Zealand coast, when a series of shipping containers wash up on the beach and looting begins.

Detective Constable Sam Shephard experiences the desperation of the scavengers first-hand, and ends up in an ambulance, nursing her wounds and puzzling over an assault that left her assailant for dead.

What appears to be a clear-cut case of a cargo ship running aground soon takes a more sinister turn when a skull is found in the sand, and the body of a diver is pulled from the sea … a diver who didn’t die of drowning…

As first officer at the scene, Sam is handed the case, much to the displeasure of her superiors, and she must put together an increasingly confusing series of clues to get to the bottom of a mystery that may still have more victims…

Containment is the third novel in Vanda Symon’s utterly gripping Sam Shephard series. Vanda Symon is a writer who knows how to pull her readers in from the very first page. I still haven’t forgotten that opening scene in the first book Overkill. When I read that, I knew I had found a writer who I would be sticking with.

Opening the book with the sight of a container washing up on a beach in Dunedin, the local residents flock to the scene to salvage whatever they can find. The sight of all these items washed up on the beach sends the locals a bit crazy, and it brings to mind the famous saying, ‘finders keepers.’ There’s no thought among the locals for the person or people who have now lost these items. One elderly woman gets a bit more than she bargained for however when she uncovers a human skull in amongst the items washed up. Not long after Sam Shephard arrives at the scene to try to and prevent people from looting the cargo, the body of a man is discovered in the water. It is soon quickly proven that the diver didn’t die of natural causes.

I really love this series. Vanda Symon’s writing is so easy to get into, and the short chapters make it a really pacy read. It’s one of those books where you’ll think, oh I’ll just read one more chapter, and you’ll think the same the next time you get to the end of one. I also love the setting of Dunedin in New Zealand, which Vanda brings to life really well.  Sam Shephard is a brilliant character. Unlike some of her colleagues, she is a character who always tries to see the good in people. This can make her quite vulnerable. But she is also tough, and she isn’t a character who will let someone get away with a crime quite so easily. You see this side to her very early on in this book.

Sam isn’t one to shy away from her feelings, particularly if they’re about another person as well and this is the case when she is talking to her best friend Maggie who she currently shares a flat with. One of the things I also like about these books is Sam’s relationship with her friend.  Their friendship comes across as feeling real, and I like the wit in their conversations as well.

If you do prefer police procedurals with darker plots, I don’t think you’ll quite find what you’re looking for with this book, but this is a solid detective story, and I would still highly recommend that you give it a go. I wouldn’t describe the books as being really tense, although there are certainly some tense scenes through the whole series, there is just something about the character’s that draws you in, and the writing is so addictive. I think there is no doubt now that Sam Shephard is fast becoming one of my favourite detectives in crime fiction.

I think I have said all I can say about how much I like these books. I implore you to read them all as you certainly won’t regret it. Every time Vanda has a new book out, I’m sure it’ll be bumped right to the top of my reading pile!

Containment is available to buy: